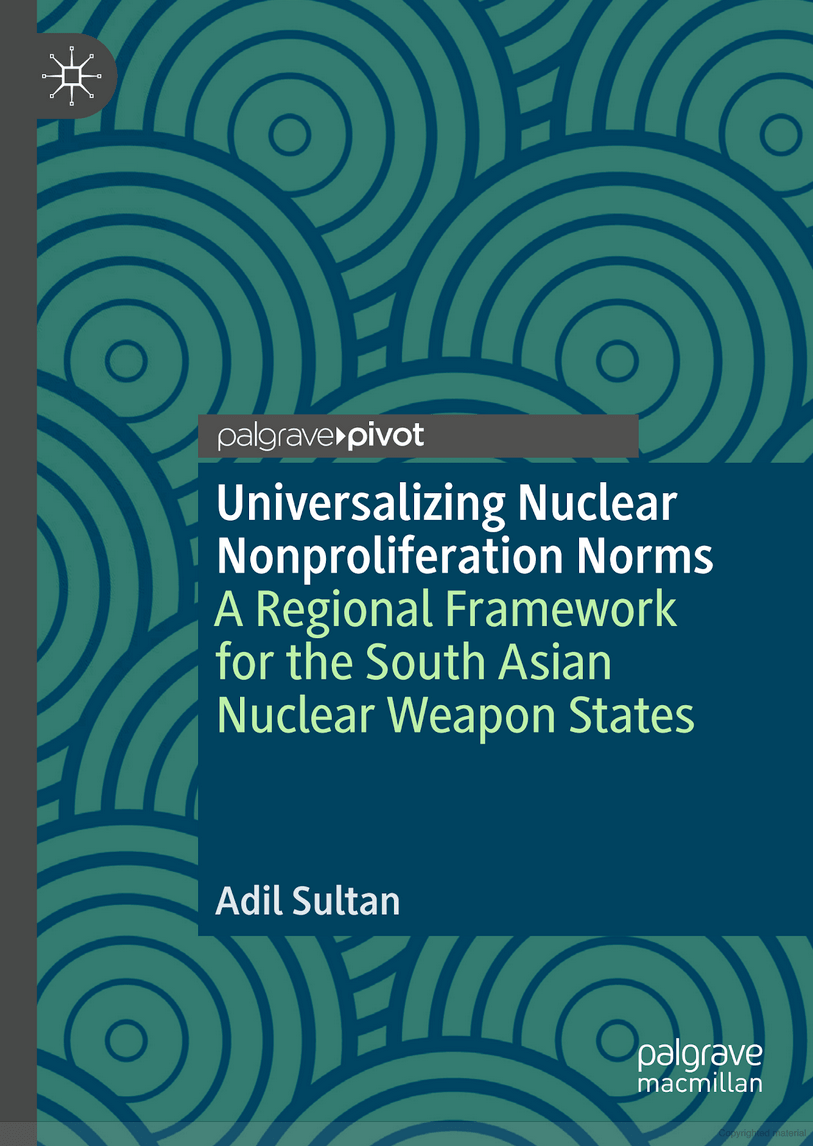 The sheer capacity of nuclear weapons to cause colossal destruction has made their proliferation a veritable threat to international security. A set of treaties and arrangements, collectively called the nonproliferation regime, aims to stem horizontal proliferation i.e. the increase in the number of nuclear weapon states. At the heart of the regime lies the 50-year old Nonproliferation Treaty (NPT). While claims of its success can be critiqued given the threats posed to it, the failure to bring three nuclear possessors in India, Pakistan and Israel in the fold of the NPT, is hardly debatable. Most if not all of the blame for this milieu lies on the five recognized Nuclear Weapon States (NWS) by the NPT. Especially with reference to the two South Asian neighbors, the nuclear haves have been unable to create an environment in which both join the NPT, give up their nuclear deterrents and become Non-Nuclear Weapon States (NNWS). Thus the impediment to universalizing nuclear nonproliferation norms is one: how to bring India, Pakistan and Israel in the mainstream nonproliferation fold without asking them to give up their weapons? Dr. Adil Sultan’s new book “Universalizing Nuclear Nonproliferation Norms: A Regional Framework for the South Asian Nuclear Weapon States, “  rightly and lucidly terms the non-universal nature of the NPT as one of the biggest challenges to the nonproliferation regime. It puts forward a new approach to bring the South Asian dyad into the mainstream regime.

Dr. Sultan stresses upon India and Pakistan to negotiate a Regional Nonproliferation Regime (RNR) that embodies the salient features of the NPT sans the condition of disarmament. The author uses Barry Buzan and Ole Waever’s Regional Security Complex (RSC) theory to make a case for the RNR. Sultan’s RNR envisages a parallel structure to the NPT that is endorsed by the NPT states including the five NWSs. As admitted by the author, garnering acquiescence of the NPT states for a regional regime would be difficult. One of the elements of the RNR would be a bilateral nonproliferation treaty between India and Pakistan. The treaty propounded by Sultan is commensurate with the spirit of the NPT, for its clauses cater for non-proliferation , disarmament and peaceful uses of nuclear technology.

The RNR would also include Regional Export Control mechanisms under which both countries could share best practices out of the sheer and common interest of stopping illicit nuclear-related trade. In the words of the author, both could be incentivized to chalk out an all-inclusive export controls treaty which could win the support of countries that are even otherwise wary of the politicization of the four established export control arrangements.

Furthermore, the RNR entails a regional nuclear fuel cycle under the auspices of the IAEA. The author fittingly enunciates some of the advantages of multilateral nuclear fuel cycle approaches  to include increased transparency and confidence. The RNR also incorporates collaboration in the field of nuclear security since both countries have taken concrete steps to buttress their nuclear security architectures especially after the passage of UNSCR 1540.

To his credit, the author has identified an important problem in the nonproliferation regime and given a unique panacea to deal with it. Moreover, Sultan succinctly discussed India and Pakistan’s approaches towards arms-control and nonproliferation treaties, and export control arrangements and pinpointed areas where both can converge to work in tandem. After all, nuclear diplomacy is similar to any other forms of diplomacy in the sense that it requires concerned parties to look out for opportunities to talk on commonalities.

One common desire that is conspicuous is India and Pakistan’s push to be considered as  mainstream NWSs. Theoretically, great powers’ reticence to accord such a status to either India or Pakistan, could prove instrumental in galvanizing Indo-Pak cooperation to redress the situation. However, the ground realities are different and hence outlaw cooperation of the sort Sultan’s book proposes.

The author is fully mindful of the hindrances to the promulgation of the RNR. Quite rightly, he alludes to the age-old and acrimonious rivalry between India and Pakistan. Needless to say, nuclear cooperation between the two countries seems untenable for now not only because each other’s capabilities are geared towards one another but also because previous nuclear Confidence Building Measures (CBMs) have not materialized due to their rejections by India.

Sultan has briefly delved on India’s changed security orientation, propped up by the US. He aptly writes that, India’s ongoing and unchecked arms buildup has made it less interested in engaging with Pakistan on nuclear-related issues. This is intertwined with perhaps the most underestimated yet important challenge to the nonproliferation regime in general and South Asian strategic stability in particular. The author has, at the end, talked about how the US’ preferential treatment has emboldened India to go on an advancement spree with regard to its strategic program. As mentioned above, the failure of the NPT in integrating New Delhi and Islamabad in its club needs to be attributed to the NWSs. The US’  geopolitical gambit in the Indian Ocean Region that aims to make India a bulwark against China, is not only encouraging New Delhi to improve and expand its strategic arsenal but is helping increase Pakistan’s reliance on the absolute weapon. Indeed, the other NWSs are also contributing towards harming the nonproliferation regime by choosing their best bets.

While the proposed RNR is a different and impactful arrangement  its constitution is improbable due to the growing mistrust and enmity between India and Pakistan. With experienced crisis managers like the US not willing to reduce the trust-deficit, it is seemingly difficult for both countries to cooperate in this or any other domain for a foreseeable future. This book and the framework it pronounces are solid and viable. The more India and Pakistan mend fences, the chances of its implementation will increase. Sultan’s study has made an important contribution in nonproliferation-related literature. The study’s main conclusions are instructive for practitioners and scholars alike. It also throws more research puzzles for South Asian watchers. One such problem could be converted into a simple question: why and who stops regionalism when it comes to nuclear nonproliferation?