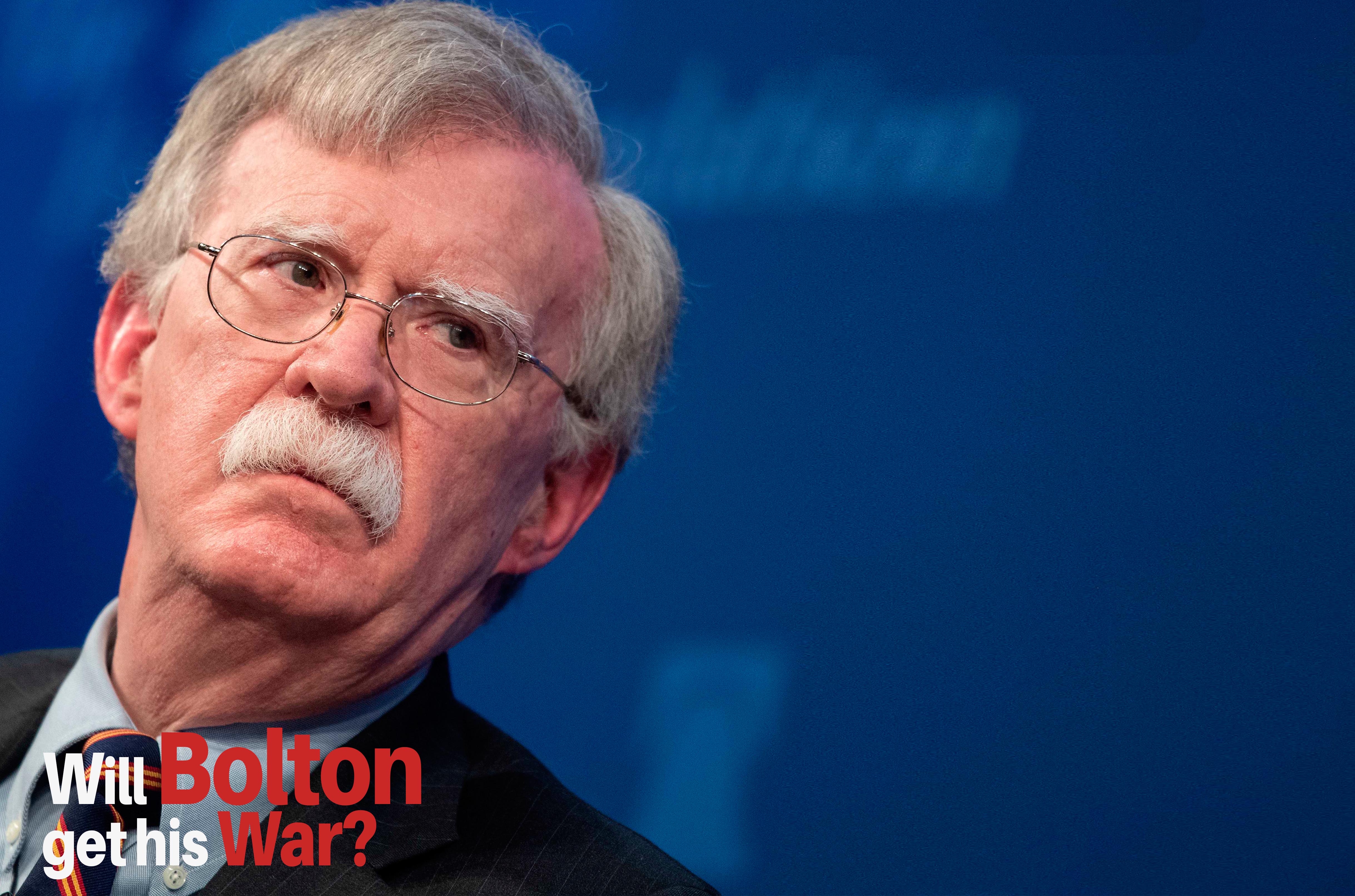 An ardent believer of exhibiting American military might, John Robert Bolton, National Security Adviser to President Trump, wants his war with Iran. Bolton has put his own spin on U.S. intelligence on Iranian military movements, much to the dismay of some in the Pentagon, pushing for U.S. military deployments in the Gulf to confront Iran.

In his 2015 op-ed for the New York Times, Bolton criticized Obama for empowering Iran by making the nuclear deal. He projected incredibly superficial understanding of the nuclear politics in the Middle East and the nuclear proliferation dynamics by stating:

“No way would the Sunni Saudis allow the Shiite Persians to outpace them in the  quest for dominance within Islam and Middle Eastern geopolitical hegemony… Saudi Arabia has an option to obtain nuclear weapons from Pakistan, allowing it to become a nuclear-weapons state overnight. Egypt and Turkey, both with imperial legacies and modern aspirations, and similarly distrustful of Tehran, would be right behind”

Bolton suggested that in order to stop Iran from acquiring nuclear weapons, it needed to be bombed through a strike similar to Israel’s attack on Iraq’s Osirak reactor in 1981 or its destruction of the Syrian reactor in 2007.

That was 2015. Fast forward to 2019. Bolton is well on his way to achieving his dream of bombing Iran. But in order for him to get his war, Iran needs to do exactly as Bolton wants: either falter on the JCPOA or become an international security risk to American interests in the region. And since Iran is not complying to Bolton’s wishes, there has to be other means to corner and provoke Iran. Bolton however, is not alone. He has the support of the President and the Secretary of State.

Framing Iran for The Tanker War

During a visit to Tehran by the Japanese Prime Minister Shinzo Abe on June 13th, a Japanese and a Norwegian oil tankers were attacked in the Gulf of Oman beyond Strait of Hormuz. The Trump administration was quick to blame Iran for the attack with the President telling the media that the attack had ‘Iran written all over it’. The U.S. Central Command stated that the Iranians had used ‘limpet mine attached to boats below the waterline using magnets’ since they had found an unexploded limpet mine near the tanker. However, the owner of the Kokuka Courageous, Japanese tanker contradicted U.S. allegations and stated that eye witness accounts suggest a projectile hitting the tanker just before the explosion and that ‘the impact was well above the waterline’. The Iranian Foreign Minister, Javad Zarif dismissed U.S. Secretary of State, Mike Pompeo’s claims of Tehran’s involvement sans evidence. The U.S. officials did not stop there. They blamed Iran for four more attacks on tankers that had occurred on May 12th in the Gulf of Oman; alleged that Iran through its proxy militia is involved in attack on two oil pipelines in Saudi Arabia; missile strike on Abha international airport in KSA; attack on U.S. embassy in Baghdad on May 19th and car bomb in Afghanistan on May 31st in which some U.S. officials were wounded.

It is clear that a case is being built by the U.S. to frame Iran for these attacks without any circumstantial evidence to substantiate the Iranian involvement. By making this case for Iran disturbing international peace and security, the U.S. is echoing its right to protect its interests in the region along with that of its allies by all means available.

Robin Wright in her recent article for the New Yorker titled ‘A Tanker War in the Middle East – again?’ reminds us of Khamenei’s distrust of the U.S. which dates back to the 1980s during the Iran-Iraq war. The U.S. had provided protection to tankers passing through the Strait of Hormuz which led to a direct military action with Iran. At the time of the U.S. attack on Iran Ajr, a landing craft used to lay naval mines during the Iran-Iraq war, Khamenei was in NY for the UNGA session. Wright maintains that Khamenei believed that “the U.S. attack on the Iran Ajr was designed to undermine his U.N. speech – and him personally.” Since becoming Iran’s Supreme Leader, Khamenei’s distrust of the U.S. has only strengthened over the years.

Bolton has a history of fabricating intelligence to get the war he wants. Not only did Bolton push for Iraq war in 2003 based on fabricated evidence on Iraq’s WMD possession, as State Department’s undersecretary for arms control and international security affairs in 2002, he sought clearance for a draft in which he blamed Cuba for developing biological weapons. At that time, analysts in the State Department dismissed the hype Bolton was trying to create viz Cuba overplaying the intelligence estimates. Now as the NSA, Bolton does not need clearance from WMD experts in the establishment to say his mind. As NSA, he now gets to suppress analyses that does not conform to his hawkish views of attacking countries that are a threat to America according to his preconceived mindset. As NSA, Bolton gets to filter what intelligence reaches Trump and determines what constitutes as the most serious national security threat to the U.S.

The U.S. National Security Council was created in 1947. Since then, the role of the NSA is to serve as an adviser to the President on a range of issues and suggest the best course of action based on intelligence and analyses. It is therefore imperative that the NSA advises the President without any bias, advocacy or personal preference on issues of national security. This is exactly what Bolton is incapable of. Bolton has trouble being an honest broker. Add to the mix a President like Trump, who is impulsive and unpredictable which could both be a blessing or a curse when you have Bolton as your NSA.

Bolton has pushed for pre-emptive strikes on both Iran and North Korea. Some say that he ‘torpedoed’ the Hanoi summit. North Korean officials call him the ‘human defect’ which needs to be ‘banished’ for dialogue to have a chance. With Iran too, Bolton wants to push for war. However, he is forgetting that Iran is not a pushover like Iraq or Afghanistan.

The only man who can stop Bolton from getting his war(s) and contribute significantly to world peace is President Donald Trump. We can collectively pray to wake up to his presidential tweet one day to read: ‘Bolton is gone’.