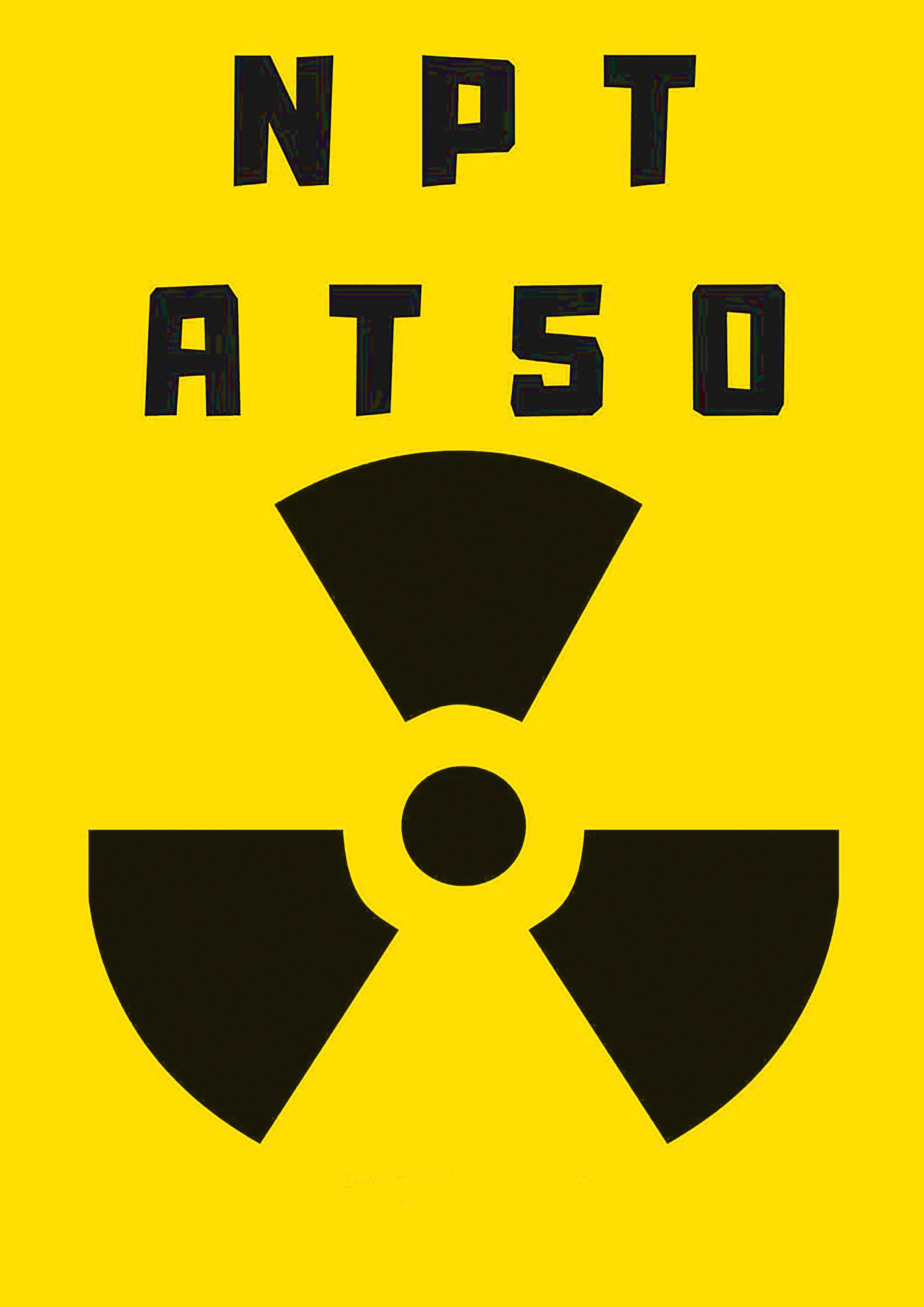 Fifty years ago, on 1 July 1968, the landmark Treaty on the Non-Proliferation of Nuclear Weapons (NPT) opened for signature concurrently in London, Moscow and Washington. The NPT entered into force on 5 March 1970, following ratification by 40 non-nuclear-weapon States (NNWS) along with its depositary States – the UK, USA and the USSR. Today, the NPT has 193 member States; India, Israel and Pakistan continue to refuse to sign the treaty, North Korea remains the only country to have left the treaty (in 2003); and, South Sudan which is the world’s newest country has yet to sign.

Over the years, the NPT has come to be regarded as the world’s most important multilaterally negotiated international treaty on global nuclear governance. Of its 193 States parties, 188 have permanently renounced nuclear weapons and have accepted and implemented intrusive on-site verification and inspections carried out by the International Atomic Energy Agency (IAEA) on their exclusively peaceful nuclear activities. For their part, five nuclear-weapon States (NWS) – China, France, Russian Federation, UK and US – have undertaken a binding obligation to reduce and eliminate all of their nuclear weapons, however, under the treaty there is no timeline or procedure for nuclear disarmament.

The NPT was drafted during 1967-1968 principally by the US and the USSR in their joint quest inter alia to prevent the emergence of additional States with nuclear weapons, especially a resurgent post-World War II Germany, and to ensure that nuclear technology would  not be used for military purposes by other States (except for the five NWS). More than 20 countries with aspirations for nuclear weapons renounced their ambitions and joined the NPT as NNWS. These included, for example, Argentina, Brazil, Italy, Japan, Switzerland and Sweden among others. South Africa unilaterally dismantled its six untested nuclear weapons and joined the NPT as a NNWS in July 1991. Belarus, Kazakhstan and Ukraine which had Soviet nuclear weapons on their territories when the USSR collapsed at the end of 1991, also acceded as NNWS to the NPT. In addition to the five NWS, there are four other nuclear-armed countries that are not members of the NPT – India, Israel, North Korea and Pakistan.

In 1995, the-then 178 NPT member States agreed that the treaty would remain in force indefinitely with the conditions to: (a) achieve nuclear disarmament; (b) conclude the Comprehensive Nuclear-Test-Ban Treaty (CTBT) by 1996, prohibiting all nuclear explosions; (c) negotiate a treaty prohibiting production of fissile material for nuclear weapons; and, (d) set up a zone free of nuclear and other weapons of mass destruction (WMD) in the region of the Middle East (MEWMDFZ). Of these, only the CTBT was completed and opened for signature in September 1996 but it has yet to enter into force; the other conditions have yet to be fulfilled.

Golden anniversaries tend to be occasions for celebration of the past half-century and for hopes for a better future. For the NPT, however, at present all signs indicate a looming disastrous failure at the quinquennial review conference to be held at the UN headquarters in New York from 27 April to 22 May 2020 marking its 50 years in force. The principal reasons being the failure: (a) of the Nuclear Weapon States to fulfill their nuclear disarmament obligations – there exist nearly 15,000 nuclear weapons in the world at 107 deployment and storage sites in 14 countries; and, (b) to establish a Middle East WMD-free zone.

There are nine nuclear-armed countries. US nuclear weapons also are deployed  in Belgium, Italy, Germany, The Netherlands and Turkey under NATO auspices.

Predictions for the collapse or failure of the NPT, leading to a “cascade” of proliferation resulting in a world with a “crowd of nuclear-armed countries”, are not new and have cropped up in the past. Whether the NPT will collapse or wither away remains an open question, especially now that in 2017 the Treaty on the Prohibition on Nuclear Weapons (TPNW) was adopted at the UN by 122 countries. None of the five NWS, nor the NATO and other US allied countries, and neither India, Israel nor Pakistan, joined in the TPNW negotiations in 2017 nor voted in favour of the TPNW. The worry of the NWS and their allies relying on nuclear deterrence is that many NNWS might opt to leave the NPT in protest at the continuing stalemate on nuclear disarmament and opt for the TPNW instead.

The obligation for nuclear disarmament emanates from Article VI of the NPT from the very day of its signing that was reaffirmed and defined by consensus agreement among all NPT States at the 1995, 2000 and 2010 NPT review conferences. However, despite substantial reductions in nuclear weapons by the five Nuclear Weapon States there still exist nearly 15,000 nuclear weapons and nearly 2,000 metric tonnes of direct weapon use nuclear materials in the arsenals of the nine nuclear-armed countries (sufficient for more than 125,000 nuclear weapons). There have been five nuclear security summits – Moscow 1996, Washington 2010, Seoul 2012, The Hague 2014 and Washington 2016 – with the objective of “locking up the world’s most dangerous materials”, but they have covered only 17% of these materials (which are in peaceful use under IAEA safeguards) while 83% is in military use and outside any international monitoring or verification.

As for the Middle East WMD-free zone, the commitment to its achievement and to bringing Israel into the NPT after its nuclear disarmament was part and parcel of the indefinite extension of the NPT in 1995. In 2010, NPT States agreed to convene an international conference on this matter in 2012. However, the US, the principal backer of the 2012 MEWMDFZ conference unilaterally backed out, leading to the collapse of the 2015 NPT review conference. If no concrete progress is achieved by early 2020 on the Middle East zone including on Israel’s denuclearization, the NPT review conference on its fiftieth anniversary in 2020 is doomed to failure.

Among the non-nuclear-weapon countries, Iran, Iraq, Libya and Syria have been found to be in non-compliance with their commitments under IAEA safeguards as they were found to be engaged in activities relating to nuclear weapons development. Of these cases, only the Iran nuclear file remains active. Earlier this year, US President Trump unilaterally pulled out of the 14 July 2015 Joint Comprehensive Plan of Action (JCPOA) negotiated by the EU, France, Germany, UK and China, Russia and the US with Iran under which Iran pledged never to develop nuclear weapons. The denuclearization of the Korean Peninsula also continues as a major challenge.

The NPT contributes to the security of all countries, including those which have not joined the treaty by ensuring that the vast majority is not developing nuclear weapons and their nuclear activities are under intrusive on-site verification or safeguards of the IAEA. Only under the NPT, do the five NWS hold themselves accountable for nuclear disarmament.

While the NPT is not popular in Pakistan and India, nevertheless it also contributes to their security. Until 1998, unlike India, Pakistan attended NPT meetings as an Observer State. It should resume doing so from next year. As for the CTBT, neither India nor Pakistan has signed, but again unlike India, Pakistan is an accredited Observer thus differentiating it from India. Pakistan can continue to improve its international standing by taking additional initiatives.

To conclude, all NPT States now need to get their act together, find a common purpose and focus, bridge their growing differences on nuclear disarmament, the nuclear weapons prohibition treaty, and the Middle East WMD zone, with a view to working for an agreed positive outcome in 2020 to strengthen the integrity and authority of the treaty as well as its full implementation and achieving universality.

The recent meeting in Helsinki between Presidents Trump and Putin, as well as the Singapore Summit between President Trump and Chairman Kim Jong Un, reflect a much-needed change from the practice of cutting off dialogue with adversaries and may encourage some much needed movement towards difficult diplomatic negotiations to resolve important international security matters. Russia and the US should extend the New START treaty on nuclear reductions to 2026 and resolve their differences over the 1987 Intermediate-Range Nuclear Forces (INF) treaty; the US and North Korea should sign a peace treaty leading to denuclearization of the Korean Peninsula through disarmament by North Korea and the cancellation of extended nuclear deterrence to South Korea by the US.