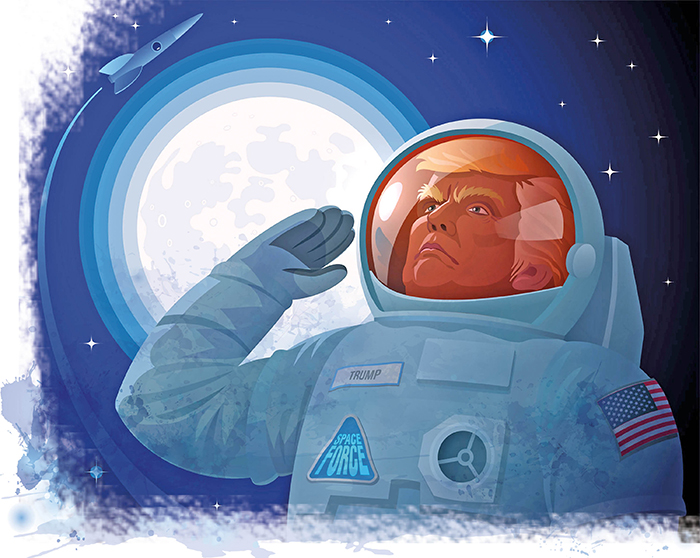 The United States of America has always introduced novel initiatives like nuclear weapons, NATO, Missile Defense Shield, quarantine etc., in world politics which, in turn have spawned competition and conflict. Although sometimes it has promoted cooperation as well but such instances are too few to be common placed. Whatever the initiative might be, US national interest has always been the main driver. Such relentless pursuit of national interest especially by superpowers like the US or Russia has historically had the potential to weaken international law. U.S. withdrawal under President George W. Bush, from the Anti-Ballistic Missile Treaty (ABM) in June 2002 is one such case in point.

The latest expression of U.S.’ pursuit of its strategic goals is President Donald Trump’s recent announcement of establishing a ‘Space Force’ as the sixth branch of U.S. military as ‘ separate but equal’ to the U.S. Air Force(USAF) which overseas U.S. military space operations. He referred to space as ‘ A War Fighting Domain’ where the U.S. needs dominance instead of presence only. U.S. Vice President, Mike Pence, on 8th August 2018 in his speech at the Pentagon in Washington D.C. echoed Trump’s words by stating that, “the previous administrations all but neglected the growing security threats emerging in space… our adversaries have transformed space into a war-fighting domain already, and the United States will not shrink from this challenge.”

According to Article IV of the Outer Space Treaty:

It is also important to note that currently the outer space is under dual use i.e. military and civilian since it is inseparable for all intent and purposes. Both civil and military space missions share launching pads, vehicles, platforms satellites etc. Just like in the case of war, the distinction between combatants and non-combatants is generally blurred in violation of the International Humanitarian Law – the promised use for ‘peaceful purposes’ of outer space is impossible. Therefore, there is a need of urgent revision and updation of the fifty-one- year old OST. Currently there are no weapons deployed in space but both the U.S. and China tested their anti-satellite capabilities in 2007 and 2008 respectively. The U.S. has also developed the Missile Defense Shield to protect its mainland and allies’ territories against limited missile attacks. These acts of states parties to the treaty somehow were inconsistent with Article IV (ii) since it can also trigger space-based arms race which will become the biggest nightmare of the 21st century. Therefore, a new international legal framework is required to deal with this probable threat to world peace. This urgency is acknowledged by the UN General Assembly in its Resolution 69/32:

The international community recognizes that present legal regime itself does not guarantee the prevention of an arms race in space. Russia and China already submitted a joint draft treaty i.e. Prevention of the Placement of Weapons in Outer Space Treaty (PPWT) but US called it fundamentally flawed so negotiations could not begin yet.

The idea of Space Force and the U.S. desire to dominate space is not that new a phenomenon. In fact, it is an outcome of constant research and strategic planning for years. Donald Rumsfeld, the then Secretary of Defense recommended in January 2001 that, “the US Government should rigorously pursue the capabilities called for the National Space Policy to ensure that the President will have the option to deploy weapons in space to deter threats to and, if necessary, defend against attack on US interests.” Later in 2006, the Bush administration’s overtly aggressive space policy based on unilateral approach stated that the U.S. will oppose the development of new legal regimes or other restrictions that seek to prohibit U.S. access to and use of space. It is hard to imagine a ‘force’ without weapons. Republicans have always aggressively pursued U.S. national interest. Even in the case of North Korea, key policy decisions taken by President Trump is a demonstration of hard power and unilateralism.

The establishment of U.S. ‘Space Force’ as the sixth branch of U.S. military by 2020 may afford another term of presidency to President Trump but it will also trigger weaponization of space. That consequently, has the potential to destroy strategic balance and stability around the world while undermining the Outer Space Treaty. Given its track record, it is not unlikely that in coming years the US may withdraw from the Outer Space Treaty as it did from other multilateral arrangements knitted by the international law whenever it suited its convenience.