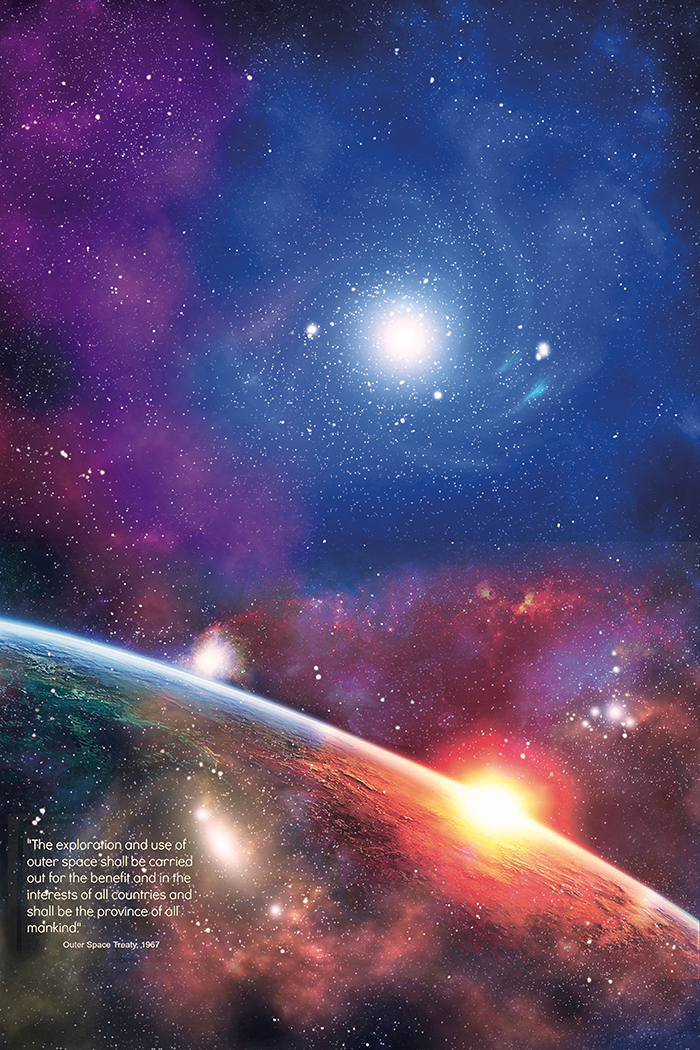 As a young boy, in the days of black and white TV, I would wait for each new episode of the sci-fi serial Star Trek. Each journey of the Star Ship Enterprise into uncharted territory where no man had ever gone before would fire my imagination. Each journey was a fascinating account of Captain Kirk on the ship’s deck and his crew of first officer Mr. Spock of mixed human-vulcan heritage and Dr. Nimoy overcoming challenges in outer space. This included aliens, other life forms, hurtling meteoroids, hostile spaceships and malfunctions in the ships operations. It seems that science is now about to imitate art. Donald Trump has spoken of reviving the manned space program and creating a space force. In a recent statement his Vice President, Mike Pence has said that time for such a force has come. The US Space Force is planned to come into being in 2020. What does this portend for the human race? Is the space about to be militarized?

For a very long time now the Prevention of Arms Race in Outer Space (PAROS) has gathered dust in the Conference of Disarmament (CD) – the UN disarmament negotiating forum – in Geneva. PAROS is a UN Resolution that basically reaffirms the fundamental principles of the 1967 Outer Space Treaty and advocates a ban on the weaponization of space. The PAROS resolution acknowledges the limitations of existing laws related to outer space and recognizes that the Outer Space Treaty does not guarantee the prevention of an arms race in outer space. The resolution calls for further measures to prevent an arms race in outer space by, among other things, urging all state parties, particularly those with space capabilities, to adhere to the objectives of PAROS.  In addition, it calls on CD to establish an ad hoc committee regarding PAROS resolution issues.

In 1981, the CD initiated talks on PAROS treaty and in 1985 an ad hoc committee was established to work out the contours of the Treaty. There was a lot of opposition, from the US on the treaty negotiations and the committee was dissolved in 1994. The committee has yet to reconvene despite an annual, near-unanimous vote by the UN General Assembly (UNGA) and the CD approving the PAROS resolution. The US is the only country to vote against the resolution, with Israel abstaining. The US has been arguing that PAROS is unnecessary because there are no weapons – and thus no arms race – in outer space at this time. It appears this is about to change.

Since 2005, the UNGA has adopted further measures to ensure the prevention of an arms race in outer space, approving an annual resolution on “Transparency and Confidence-Building Measures in Outer Space Activities.”  China and Russia have produced several working papers on PAROS, which offer suggestions for different confidence building measures (CBMs) together with suggested verification measures. Some of these suggestions include: exchanges of information, demonstrations, notifications, consultations, and thematic workshops. In 2008, China and Russia submitted a draft treaty to the CD entitled “Treaty on the Prevention of the Placement of Weapons in Outer Space, the Threat or Use of Force against Outer Space Objects” (PPWT). The PPWT reiterates the importance of a weapon-free outer space, defines relevant terms such as “weapons in outer space,” and proposes the creation of an additional protocol to establish “measures of verification of compliance with the Treaty.”

In January 2007, China caused ripples, when it tested an anti-satellite (ASAT) weapon. A Chinese weather satellite in polar orbit was killed by a kinetic vehicle. The test was claimed to be successful. China claimed it had informed the US, Japan and other countries in advance. This advance notification did not prevent a visible uproar against the testing by the US. Although the Chinese said that they would not be conducting any further tests, there have been reports of use of the same system for missile interception in January 2010 and January 2013.

The potential US space force has been criticized for being a wasteful and extremely expensive exercise. Many are reminded of the Strategic Defence Initiative (SDI) popularly known as Star Wars system of space based weapons announced by Ronald Reagan in 1983. The program was shelved among other reasons because of the end of the Cold War. Now that Trump wants a space force, there is likely to be competition from the Chinese and Russian side. The Indians are also pursuing an active space program. Can they or the Israelis be left far behind? Is the world about to experience an arms race in space? Seriously it is time for the non-space going nations to actively support the renewal of talks on PAROS and a sincere effort to keep space only open for scientific exploration. Humanity must be saved from a militarized outer space.