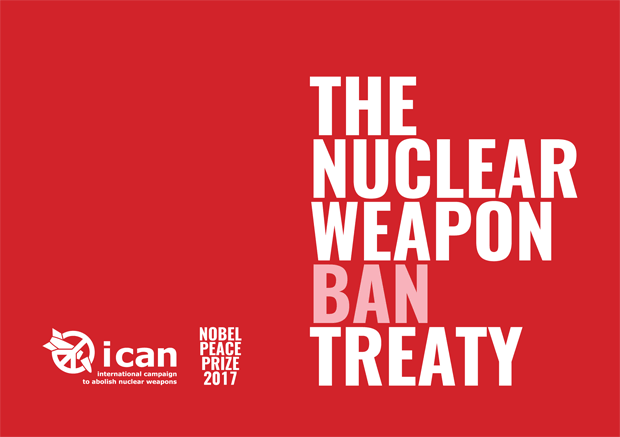 International efforts to achieve global nuclear disarmament are as old as the nuclear weapons development. The United Nations General Assembly’s first resolution in 1946 established a commission to control nuclear energy to be used for peaceful purposes with the aim to eliminate nuclear weapons. However, divergence between disarmament and deterrence debate could not be bridged over the years and nuclear disarmament remained an elusive dream, despite many efforts in the pursuit of this objective. Nuclear Nonproliferation Treaty (NPT) was the first major international legal instrument that committed the state parties to “pursue negotiations in good faith” towards the end goal of nuclear disarmament under the “grand bargain” struck between Nuclear Weapon States and Non Nuclear Weapon States. However, Nuclear Weapon States under the NPT failed to keep their side of the bargain, as they could not move forward on disarmament commitments promised under article VI of the NPT. Furthermore, consistent failure to make any substantive progress at the other fora such as the Conference of Disarmament (CD) created a sense of frustration among the Non Nuclear Weapon States.

President Obama’s Prague speech in 2009 reinvigorated the nuclear disarmament agenda as he promised a reduced role of nuclear weapons in the US national security and envisioned a world without nuclear weapons. Although Obama administration could not deliver on key promises such as ratifying Comprehensive Test Ban Treaty (CTBT), it put flesh on the bones of disarmament debate. The debate advanced when the final document of the NPT 2010 Review Conference (Rev Con) made a reference to “the catastrophic humanitarian consequences that would result from the use of nuclear weapons.” This reference shifted focus towards the humanitarian dimension of nuclear weapons and rebranded global disarmament debate under International Humanitarian Impact Movement. Subsequently, three humanitarian conferences held in Oslo (2013), Nayarit (February 2014) and Vienna (December 2014) provided the necessary boost to the humanitarian initiative. By the third conference, 127 states committed “to identify and pursue effective measures to fill the legal gap for the prohibition and elimination of nuclear weapons.” These conferences aimed at mustering enough support to outlaw and stigmatize the possession and potential use of nuclear weapons. The numbers were significant enough to attract the US and UK to attend the third conference.

In 2013 and 2016, the UN General Assembly established two open-ended working groups (OEWG) to suggest ways to take forward multilateral nuclear disarmament negotiations. While they discussed various aspects, the final report of the second OEWG recommended convening a conference to negotiate a legally binding instrument to ban nuclear weapons, leading to their total elimination. In July 2017, the United Nations General Assembly adopted the Treaty on the Prohibition of Nuclear Weapons – first legally binding instrument to prohibit nuclear weapons. An impressive number of 122 states voted in favor and the treaty opened for signatures on September 20, 2017. Currently, with 71 signatories and 21 states parties, the treaty will enter into force once 50 states have ratified or acceded to it.

While the ban enthusiasts hailed this treaty as a landmark agreement and one that would initiate the “beginning of the end of nuclear weapons”, there are some misplaced expectations garnered during and after the conclusion of the treaty. Despite having displayed a great normative value, the treaty faces substantive challenges in realizing total elimination of nuclear weapons as envisaged during the negotiation process.

A major challenge arose due to lack of inclusivity as none of the primarily concerned states possessing nuclear weapons participated in the negotiation process. The ban proponents hoped that the treaty would gather momentum the way it was achieved by the chemical, biological weapons and landmines ban agreements. However, major difference lies in the will of Nuclear Weapon States. Prohibition of chemical and biological weapons was achieved only when major possessors agreed to dismantle their stockpiles when they felt it was no more needed for their national security. Whereas for the nuclear weapons ban negotiations, none of the states possessing or hosting nuclear weapons participated in the debate or signed the treaty. Even countries like Norway who were at the forefront of humanitarian initiative and hosted one of the HIM conferences, did not participate in the negotiation process. The Netherlands was the only NATO member that participated in the negotiations in view of mounting domestic pressure, however, it did not vote in favor of the treaty.

The treaty was hastily negotiated and concluded in record four weeks time. The time constraint and absence of a preparatory process put premium on the scope specifications of the Ban Treaty. There were many devils in the detail and to avoid any potential roadblocks at the initial stage, the negotiating states decided to bypass contentious issues, deferring them to later stage. Issues such as the safeguards or verification provisions, treaty’s impact on and relationship with the existing security alliances, prohibition on the threat of use of nuclear weapons and on testing, transit and withdrawal issue proved contentious and susceptible to subjective understanding.

With the absence of Nuclear Weapon States especially strong dissenting voices from France, U.S., China and UK, the ban treaty process further divided an already polarized nonproliferation community. Nuclear Weapon States believe that the disarmament assumptions run contrary to the nuclear deterrence debates, thereby ignoring the raison d’être of nuclear weapons in security policies of the possessing states. Inexorably, they emphasized on an incremental approach to disarmament that would not undermine their national security. On the other hand, two-thirds  of the international community supporting nuclear ban is adamant to roll back this hard earned tool to delegitimize use and possession of nuclear weapons, leading to their complete elimination. These strong positions have eroded the chances of some convergence in coming years and run the risk of weakening the global non-proliferation regime even further.

In an environment where nuclear nonproliferation regime faces serious challenges and the current order runs the risk of becoming irrelevant, conclusion of a treaty prohibiting nuclear weapons by a two-third majority is truly remarkable. It reflects growing frustration of the  international community due to lack of progress on disarmament agenda and reveals complacency of Nuclear Weapon States. However, the very process of negotiating Ban Treaty has also exposed the inherent flaws in the disarmament debates and the challenges posed by the absence of Nuclear Weapon States.

While the uncertainty surrounding the long-term impact of the Ban Treaty is quite palpable, one cannot ignore the value of shifting focus of the debate on the humanitarian dimension. This also throws light on the need to find innovative and more realistic ways to develop a shared vision of nuclear future.

Sitara Noor is an independent consultant based in Islamabad.