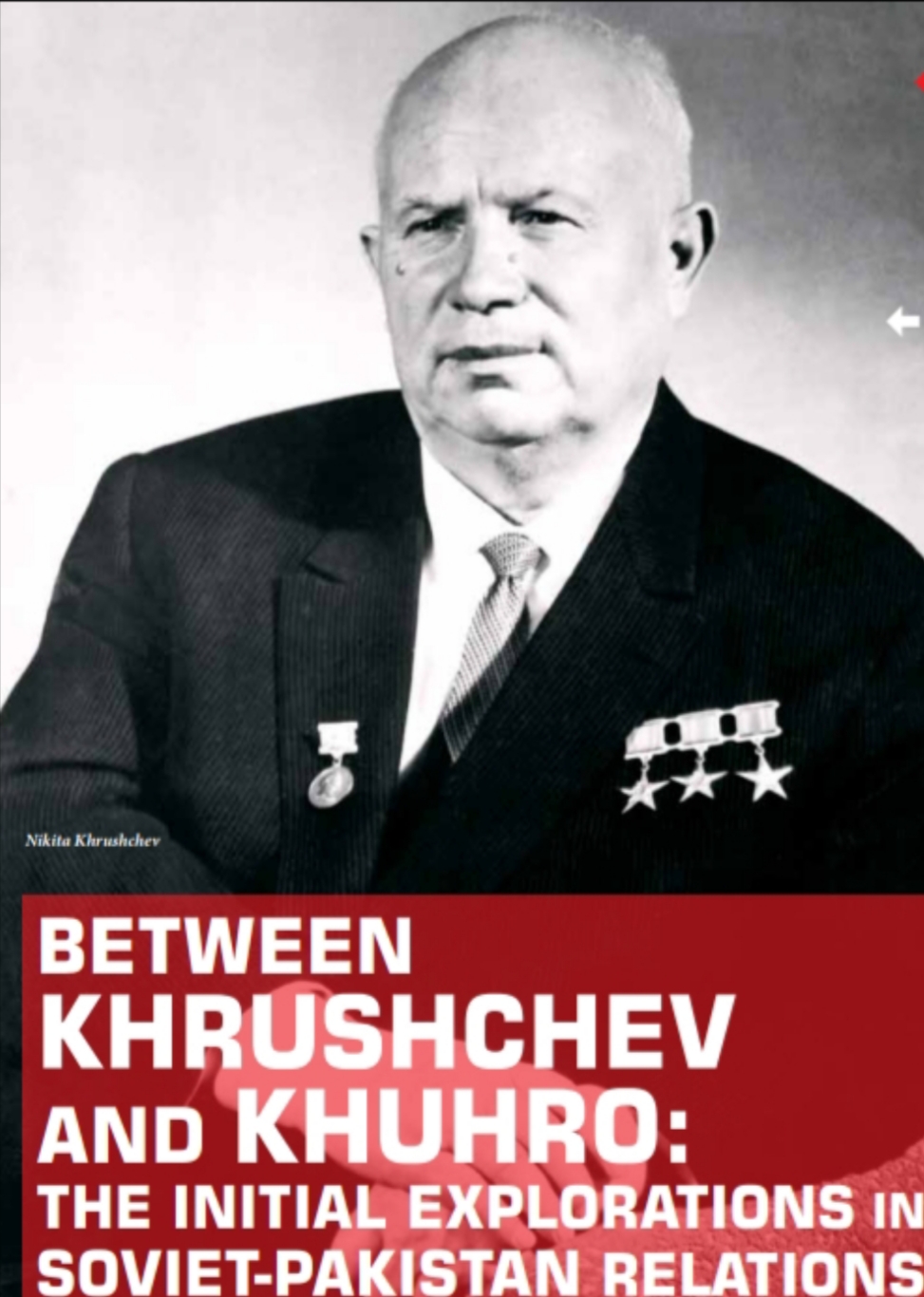 Not long after coming to power in the wake of Joseph Stalin’s death, the First Secretary of the Soviet Communist Party, Nikita Khrushchev presided over a major turn in Soviet foreign policy, a turn towards what today we would call the ‘global South.’ The move was a reasonable response to the rapid transformation of international politics. Decolonization opened up new opportunities for extending Soviet influence to far-flung corners of the world by offering fledgling post-colonial regimes political support, economic aid and, of course, weapons.

The assumption in Moscow was that these regimes could become the Soviet Union’s natural allies, or at least fellow-travellers, in the struggle against ‘imperialism.’ But what made sense from the perspective of the Marxist-Leninist theory, did not always make sense in practice. A case in point was the Soviet relationship with Pakistan that, from the very beginning, was plagued by tensions and mistrust. Pakistan was notably omitted when in 1955 Khrushchev undertook his first grand tour of Asia, visiting Afghanistan, India, and Burma. While in India, he strongly endorsed New Delhi’s position on Kashmir, earning Jawaharlal Nehru’s gratitude.

But the following year, the Soviet leadership made a tentative attempt to engage with Karachi. This balancing act was the consequence of Moscow’s concern over Pakistan’s membership in the British-sponsored Baghdad Pact, which threatened the Soviets Union’s southern flank. In addition, building bridges to Pakistan reflected Moscow’s growing appreciation of the complexities of the so called “third world,” and a realization that careful neutrality was often a better policy than mindless support of one side over the other in conflicts that the Soviets could not even begin to understand.

Hence, in March 1956 Khrushchev’s close confidante, Anastas Mikoyan travelled to Pakistan on an ice-breaking mission. The CIA reported that the hosts were “impressed.” “A change has come over the Russians,” noted the newly appointed President Iskander Mirza. The order of business was trade, and Mikoyan even made it sound like Pakistan could receive Soviet economic aid, if only anyone in Karachi bothered to ask. Then, later that summer, Pakistan’s parliamentary delegation went on a tour of the Soviet Union. On August 2, 1956, the delegation, led by Muhammad Ayub Khuhro, met with Nikita Khrushchev and then-Soviet Prime Minister Nikolai Bulganin. The record of their discussion, recently declassified in Russia, offers a remarkable window on the evolution of Moscow’s relations with Pakistan.

In the course of his talks in Moscow, Khuhro’s main concern was to bring his hosts around to support Pakistan’s views on Kashmir and the territorial dispute with Afghanistan. This the Soviet leaders refused to do. Khrushchev suggested that Karachi simply put the problem aside until it “matures” like a fruit. There was no need for the Soviets to mediate: Pakistan and its neighbours could resolve their problems through consultations. When pressed, however, Khrushchev again reiterated that he was with India and Afghanistan when it came to territorial disputes. It was not because he properly understood these disputes. Rather, it was because of Pakistan’s involvement in anti-Soviet military alliances.

Indeed, Khrushchev and Bulganin lashed out at Khuhro over Karachi’s membership in the Baghdad Pact and SEATO, drawing a contrast with what they depicted as Nehru’s peace-loving policy and Pakistan’s militancy. “India and Pakistan,” Khrushchev said, “were born from one mother… India took the road of peaceful coexistence and you picked up a stick as soon as you were born. You don’t have enough strength but you are already spoiling for a fight, grabbing a stick and threaten your neighbours with it.”

Nonplussed by this inauspicious opening, Khuhro offered spirited defence of Pakistan’s involvement in military pacts. He proclaimed that Pakistan had no intention of ever fighting the Soviet Union and if Turkey, England or the United States attacked the Soviets, Pakistan would not participate in the war. So much for alliance obligations. “We need it [the Baghdad Pact] for self-defence,” said Khuhro. “Who do you need to defend yourselves against,” retorted Khrushchev – “tigers and lions”? He was unwilling to buy Khuhro’s explanation that Pakistan felt a constant threat of India’s invasion, and suspected that Karachi was being manipulated into joining hostile pacts. Never mind, he declared. “All these pacts you have joined will die like insects. We do not fear them.”

Thus, on the whole, it was hardly a friendly conversation. Khuhro was clearly exaggerating when he claimed, upon returning to Pakistan, that the Soviet leaders “wanted to cultivate close and mutually beneficial relations.” If anything, Khrushchev’s main tactic was to bully Karachi into quitting anti-Soviet pacts. “Don’t be offended,” he said. “But you cannot fight with us because we are considerably stronger than you. I am not bragging, I am just putting things as they are.” This early episode of Soviet-Pakistani relations points to one underlying characteristic of the Soviets’ approach to Pakistan: it was always part and parcel of Moscow’s regional policy, and that imposed severe constraints on the relationship.

Always seeing India for a much more important partner, the Soviet leaders were unwilling to engage with Pakistan on its own terms. When opportunities presented themselves – as in 1966 – the Soviets were happy to mediate between India and Pakistan, and assumed the pretence of genuine neutrality, but for the most part they demonstrated the attitude that was already clear in Khrushchev’s comments in 1956: that Pakistan was just a pawn of external forces, and that the Pakistani leaders would do well to come to their senses and embrace the USSR because they needed a good relationship with Moscow much more than the other way around.

This perspective on Pakistan as a “pawn” became especially pronounced in the 1980s, during the Soviet conflict in Afghanistan. At one point, the Soviets and the Indians, discussed the possibility of launching a joint invasion on Pakistan. It was only with the end of the Cold War that Moscow attempted to reposition itself on the Indian subcontinent by seeking rapprochement with Islamabad.

The Cold War has receded into history and the regional alliances that once annoyed Khrushchev – the Baghdad Pact and SEATO – are now merely a vague recollection. Instead, in June 2017, India and Pakistan both joined a regional body co-sponsored by the Russians and the Chinese, the Shanghai Cooperation Organization. Of course, the SCO is by no means an alliance. Yet in a sense, the erstwhile adversaries now find themselves on the same side of the trenches. It remains to be seen whether being, figuratively speaking, on the same side, will take the edge off the long-running conflicts like the one between India and Pakistan. If and when tensions erupt, the main challenge for Russia will be to engage with Islamabad on its own terms. The long and troubled history of Moscow’s regional diplomacy suggests it would not be easy.