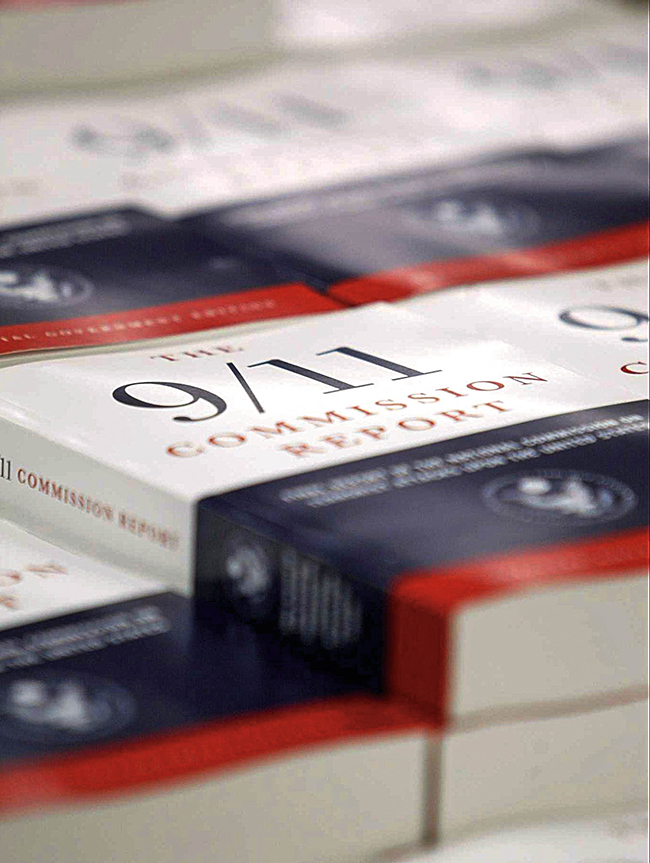 It was on September 11, 2001, that the event known as 9/11 took place. On this date, three buildings, WTC1, WTC 2 and WTC 7, located in the Manhattan District of NY city, collapsed, as if in a free fall. Two of these were apparently hit by what were said to be hijacked aircraft and the third building was said to have collapsed as a result of fires that began when burning material from WTC 1 and 2 fell on WTC7. The aircraft  were said to have been hijacked by collaborators of Osama Bin Laden. On this pretext the US launched an attack on Afghanistan, and has, since, waged endless wars in the world destroying Afghanistan, Iraq, Libya, Syria, and so on. These are energy-resource rich Muslim countries, while Afghanistan has rare minerals and is located strategically on the route of oil and gas transportation out of the Central Asian states.

But is the dominant narrative on 9/11 correct? Does it merit closer scrutiny? This question needs to be answered logically and comprehensively because it has been made the basis of unending US militarism post-9/11.

It was on June 5, 2006, that an investigative journalist enquired from Rex Tomb, the Chief of Investigative Publicity for FBI, as to why was the name of Osama bin Laden absent from the Most Wanted FBI List of 9/11 perpetrators. Rex Tomb replied:

So did the US invade Afghanistan without any evidence connecting Bin Laden to 9/11? It seems so. Interestingly, this explosive statement was completely blacked out by the mainstream media (MSM).

It is well known that fires cannot melt or soften steel which has a melting point of 1538o C. The highest temperature known to have been generated by fires is 340o C.  Fires, before or after 9/11, have left steel structures intact in every case, even though everything else in the buildings was gutted. How did fire bring down these three buildings still remains an unanswered question. Richard Gage, founder of Architects and Engineers for 9/11 Truth, makes this case:

“The official FEMA and NIST reports provide insufficient, contradictory, and fraudulent accounts of the circumstances of the tower’s destruction . . . We are therefore calling for a grand jury investigation of NIST officials . . .”

Naiman further stressed that “90,000 tons of concrete” and the entire “office furniture, fixtures and equipment” weighing thousands of tons “are missing from the debris pile.”  NY Governor George Pataki also stated: “The concrete was pulverized . . . All of lower Manhattan, not just this site, from river to river, there was dust, powder . . .” What technology could have converted concrete and metallic fixtures and equipment to fine powder enough that “a four-inch layer of dust covered Lower Manhattan.”  It is hard to wrap one’s head around this one since fire just cannot turn concrete and metal into fine powder. Dr. Judy Wood has coined the term “Dustification” for such anomalous 9/11 effects to contextualize the phenomenon.

In an op-ed titled “Stonewalled by the C.I.A.”, that appeared in the New York Times on January 2, 2008, Thomas Kean and Lee H. Hamilton, Chair and Vice Chair respectively of the 9/11 Commission stated:

“What we do know is that government officials decided not to inform a lawfully constituted body, created by the Congress and the president, to investigate one of the greatest tragedies to confront this country. We call this obstruction.”

Why did the CIA obstruct? What was being hidden from the 9/11 Commission? No one knows for sure. However, John Farmer, senior counsel to the official 9/11 Commission writes in his 2010 book The Ground Truth:

“In the course of our investigation into the national response to the attacks, the 9/11 Commission staff discovered that the official version of what had occurred [the morning of September 11, 2001] – that is what the government and military officials had told the Congress, the Commission, the media and the public about who knew what when – was almost entirely and inexplicably untrue.”

Why did the US government and the military lie and continue to lie about 9/11? Millions of Americans still believe that their government concealed information from them about 9/11 attacks. Many have speculated the reasons for official information on 9/11 still missing. The predominant counter-narrative to the mainstream narrative on 9/11 is that the Bush administration lied because the war of aggression against Afghanistan had already been planned as part of a long range agenda of global domination that could not have been revealed to the US public. Afghanistan was to enable the US to gain a military foothold in Central Asia so that it could exploit the energy and mineral resources of the region for US corporations. In addition, it was to help acquire military bases in the region in order to threaten China and Russia in accordance with the Neo-con Project of New American Century (PNAC).

For those who follow the US foreign policy closely, it is not a hidden fact that the Council on Foreign Relations (CFR) predominately dictates US foreign policy. However, it is less well known that CFR is a front for Britain’s Royal Institute of International Affairs (RIIA) and that both the CFR and RIIA were set up by the Rothschilds after WWI. Together these think tanks act like an invisible government, make policies and publish their ideas in mainstream journals, the likes of Foreign Affairs for example. Articles are expanded into book form and are given raving reviews to popularize it by the MSM, considered to be a propaganda arm of the US corporate Elite. For instance, CFR member Samuel P. Huntington first published an article with the title ‘The Clash of Civilizations?’ in a 1993 issue of Foreign Affairs. His book with the similar title ‘The Clash of Civilizations and the Remaking of World Order’ was published in 1996 which brought global fame to the author due to the fantastical hypothesis it carried. The thesis of the Clash of Civilizations conjured the divide between the West and the rest – mainly the Islamic civilization as the one working against the West – something that Huntington predicted needed to be controlled. In the post-Cold War world, without communism, Huntington provided the roadmap to get hold of the energy resources of the Muslim world as means of exerting control over them. This thinking was further propagated by Zbigniew Brzezinski, who was the co-founder of the global elite Trilateral Commission in 1973,  in his 1997 book titled The Grand Chessboard: American Primacy and Its Imperatives. Like Huntington, an article on this theme was published by Brzezinski in Foreign Affairs prior to expanding it in book form. Brzezinski wrote:

“A power that dominates Eurasia would control two of the world’s three most advanced and economically productive regions. A mere glance at the map also suggests that control over Eurasia would automatically entail Africa’s subordination, rendering the Western Hemisphere and Oceania geopolitically peripheral to the world’s central continent. About 75 percent of the world’s people live in Eurasia, and most of the world’s physical wealth is there as well, both in its enterprises and underneath its soil. Eurasia accounts for 60 percent of world’s GDP and about three fourths of the world’s known energy resources.”

It is the wealth and energy resources of Eurasia that are the targets of the limitless greed of the global financial Elite that also owns the four largest oil companies of the world. Brzezinski further writes (pp.35-36, emphasis added):

“It is also a fact that America is too democratic at home to be autocratic abroad. This limits the use of America’s power, especially its power for military intimidation.  Never before has a populist democracy attained global supremacy. But the pursuit of power is not a goal that commands popular passion, except in case of a sudden threat or challenge to the public’s sense of domestic well-being. The economic self-denial (that is defense spending) and human sacrifices (casualties among professional soldiers) required in the effort are uncongenial to democratic instincts. Democracy is inimical to the cause of imperial mobilization.”

This means that in order to build a global empire – a one world slave state governed by the financial Elite – the US constitution must be undermined so that US no longer remains a democracy. Simultaneously, “a sudden threat or challenge to the public’s sense of domestic well-being” be created, to bring the US public on board to fighting wars. Thus the Elite agenda, designed and published by CFR and elsewhere, by Brzezinski et al was: dictatorship at home and war abroad. This is precisely the course things have taken after 9/11.

“What we have is Government of Wolves. More than that we are now being ruled by a government of scoundrels, spies, thugs, thieves, gangsters, ruffians, rapists, extortionists, bounty hunters, battle ready warriors and cold-blooded killers who communicate using a language of force and oppression.”

The FBI and other civilian law enforcement agencies have been ‘militarized’ precisely to oppress the people of America if they oppose wars abroad and want to have their constitutional liberties back. These civilian law enforcement agencies have been provided with armoured vehicles and military gear. The Department of Homeland Security (DHS) has purchased 2.2 billion rounds of hollow point bullets which as some have speculated is enough for a 30 year civil war (during the Iraq war only 70 million rounds were used when the war was at its height).

The US invasion of Afghanistan was pre-planned. Niaz A. Naik, Pakistan’s former Foreign Secretary and Pakistan’s representative at a four-day meeting in Berlin in July 2001 was told by ‘senior US officials’ in July 2001 that war would be imposed on Afghanistan by October 2001 if the Taliban did not share power with US friendly factions. Naik stated this in a BBC interview and has never been contradicted. Naik’s statement is also quoted by David Ray Griffin in his book titled The 9/11 Commission Report: Omissions and Distortions. Michael Craig Ruppert, American writer and author of The Decline of the American Empire at the End of the Age of Oil who was hated by the CIA and died in 2014 in an apparent ‘suicide’ wrote in an article on the timeline surrounding Sept 11th:

“Sept. 1-10 – In an exercise called Operation ‘Swift Sword’ and planned for four years, 23000 British troops are streaming towards Oman. Although the 9-11 attacks cause a hiccup in the deployment, the massive operation was implemented as planned. At the same time two US carrier battle groups arrive in Gulf of Arabia, just off the Pakistani coast. Also at the same time, some 17000 US troops join more than 23000 NATO troops in Egypt for ‘Operation Bright Star’. All these forces are in place before the first plane hits the WTC.”

There are some inconvenient truths about what actually happened on 9/11. The attacks on the World Trade Centre and the Pentagon on 9/11 were carried out to implement the strategy spelled out by Brzezinski on behalf of, not just the CFR, but his real pay masters, the Rothschilds and Rockefellers, etc. who constitute the inner core of the global financial Elite. The Elite treats the entire globe as a real estate and wants to own it all. It wants to enslave all mankind, but by significantly and violently reducing the global population. They own the governments of the US, UK and Israel. Europe of course, has the status of a vassal as far as the US is concerned. The New World Order means a global slave state run by the Elite and its subservient collaborators. It is in their interest that the engineered reality about 9/11 is mainstreamed and the counter-narratives and truth missions be dubbed as conspiracy theories.