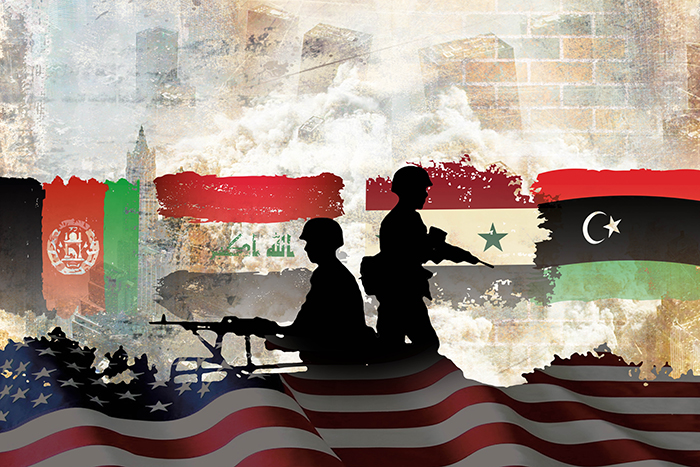 The dastardly attacks on the Twin Towers on 11th September, 2001 were colossal and impactful. The aftershocks of the 9/11 carnage jostled countries in South Asia and the Middle East. The magnitude of the event was such that it had an indelible impact on US’ foreign policy, and given that the US was the mightiest power in a unipolar world order, it became a watershed. US’ foreign policy gambits always pandered to raison d’ etat and resorted to means of containing its foes. Setbacks like the Vietnam War were mixed with successes in the Afghan war in 1979 against the former USSR. However, post 9/11, the US’ proclivity towards interventionism, use of force and muscular diplomacy has been dealt with severe blows while ceding more space to its adversaries.

In less than a month after 9/11, the United States started its air campaign against the Taliban in Afghanistan. The military objectives of Operation Enduring Freedom were the obliteration of terrorists’ havens and the war-waging capabilities of the Taliban forces. The aerial campaign from land-based B1, B2 and B52 bombers certainly have telling impact in conventional wars but are ineffective against insurgents since they elicit strength from changing locations and tactics. With their leadership well intact, the Taliban regrouped and emerged as a stronger force. The ill-thought out application of military power precludes the possibility of achieving success through the employment of a military-heavy policy in Afghanistan. The troop-surge in 2010 and the New South Asia Policy announced in 2017 have clearly amplified the fact that an increase in firepower was an anathema to peace in Afghanistan.

Not only are the Taliban stronger than they were since 2001, Washington’s threats have also alienated its ally, Pakistan. Today, Islamabad is not only resisting US’ pressure but is also fairly wedded with China and fast-developing ties with Russia. Here it is important to assert that Moscow and Beijing are surely increasing their footprints in Afghanistan. Both of these strategic challengers to the US are consistently pushing for a political solution to the Afghan quagmire. It is US’ persistence with its military-heavy policy that has allowed its nemeses to ingress in Afghanistan.

The Iraq War in 2003 and its aftermath exemplify how the supersession of diplomacy and a penchant to apply military force resulted in trouble for the US. The credibility of the US and its intelligence community was called into question after it was found that there were no Weapons of Mass Destruction (WMDs) in Iraq when the US attacked it under the aegis of UNSC 1441. After overthrowing Saddam Hussein, the US failed to chalk out a stable political order. Sectarian violence and the advent of the Islamic State(IS) not only compounded challenges for the US but also helped give Iran a greater clout in Baghdad.

Similarly, US’ continued military presence in Syria even after the defeat of the ISIS has again put doubts on Washington’s ability to appreciate ground realities. The Assad regime, however repressive, does not pose any threats outside Syria. That said, the massive intervention on part of the US has not invoked Iranian meddling but also increased Assad’s reliance on US’ rivals.

The Washington-Tehran rivalry since the Iranian Revolution defies Lord Palmerston’s quote on inter-state relations who sagely stated that ‘there are no permanent friends or enemies, only permanent interests.’ Today, both countries are embroiled in threatening each other. The US’ withdrawal from the Iran Nuclear Deal has compelled scholars to analyze possible war scenarios. The deal was a landmark agreement meant to stem Iran’s nuclear program; it was not meant to check Iran’s policies in Syria, Iraq or Lebanon for that matter. Washington’s unilateral withdrawal just added one more point of friction to the many outstanding disputes between the two arch-rivals. The US’ strategic practitioners have continually advocated punitive measures against Iran without understanding as to how the Islamic Republic conducts its foreign relations based on its national interests.

The situation in the Korean Peninsula is all but disconcerting. The Trump administration’s ‘Fire and Fury’ approach to handling Kim Jong Un’s nuclear weapons made Pyongyang fully utilize the value of the ultimate weapon. By threatening Guam and Continental US, the Kim regime deterred a US’ counterforce strike. The saber-rattling ultimately resulted in direct talks between President Trump and Kim. While Kim’s pariah status was done away with, Trump left Singapore without any assurance of ‘Complete, Verifiable and Irreversible Denuclearization.’ Here, the US has been unable to weave a link between insecurity and nuclearization.

One common theme that permeates in all these and other US foreign policy engagements is national security. While security was an important goal for the US before 9/11, it has now become a cornerstone. However, if one were to look at the Taliban or the Kim regime, it becomes abundantly clear that the security threat has been inflated in each case. The Taliban neither had the will nor the capacity to radiate their influence beyond the borders of Afghanistan, let alone the US. Hence, Washington’s inability to discern between the Taliban and Al-Qaeda was a mistake. Pyongyang’s nuclearization has now turned into a security challenge and perhaps will continue to remain so unless the US resorts to constructive dialogue.

As Gen. George S.Patton famously said “if everybody is thinking alike, then somebody is not thinking.” The US, by and large, has thought in the same way when it comes to dealing with foreign policy challenges. Coercive diplomacy and militarism have only given more space to current and potential enemies of the US. A muscular approach may also go on to swell the ranks of the challengers.