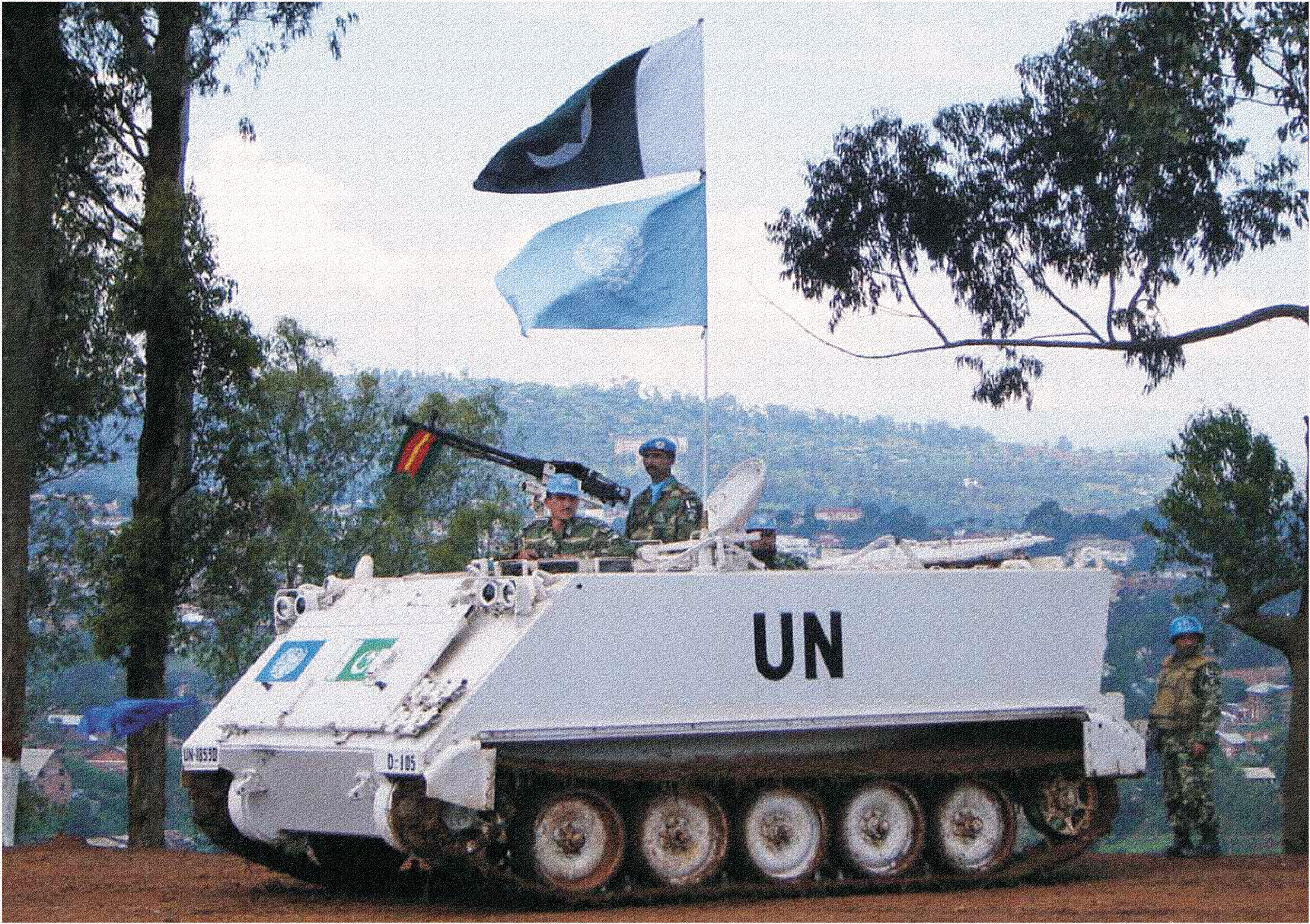 Where the money flows, the story goes!

Pakistan has always been on the forefront of providing support to the international community in maintaining peace. Apart from being one of the very few countries in the world with an active, real and many times larger enemy to concentrate its defensive efforts against, namely India, Pakistan has always contributed to international peacekeeping efforts around the globe in an un-paralleled manner. It was one of the foremost countries to provide resources for UN Mission in Congo in 1960 while still in the embryonic phase of its own development having limited trained human resource capacity and equipment. This clearly depicts Pakistan’s stance toward international peace keeping.  It has since continued to provide military, police, and civil administrative staff to UN missions in over 41 countries with a total participation of over one hundred and fifty thousand personnel. Pakistan continues to remain in the top two providers of Peace Support Staff in international peacekeeping operations for the past many years. Moreover, Pakistani forces have generally remained highly praised by the UN leadership as well as the countries where deployed due to their high standards of moral conduct and humanitarian support. Whether it be Somalia or Sierra Leone or Sudan, Pakistani contingents have been highly praised and deeply loved by the local communities and UN leadership alike.

Officially, Pakistan has provided support to UN in the form of Peace Keeping Forces, commonly known as Contingents (Forces), Military Observers (MILOBs) and Civil Police (CIVPOL). The contingents further provide military forces and equipment for peace keeping, engineer support for rebuilding roads and infrastructure, hospitals for health care and civil police for training or operating in collaboration with local government. Military Observers may be tasked to carry out numerous activities but always without weapons which puts them at high risk. These tasks may vary depending on the mandate and mission but may include assessments of key elements of unrest, monitoring and reporting government functioning, monitoring UN Forces and their output, illegal activities including Diamond Mining, human trafficking etc.

Pakistan has provided assistance to UN Peace support operations in many African countries including Sierra Leone over the past 50 years where one of the largest contingents was deployed. The assistance provided has been in numerous forms while interacting as mediators between the parties in conflict and in support of a democratic governance structure, with aim of strengthening the system and removing the prime causes of the conflict due to which it was initiated. These measures include electoral support based on power sharing, socio-economic development, confidence building measures while enforcing law and order. Use of force against any party in the conflict has always been kept as the last resort if all else fails and has mostly been used to ensure that law and order prevailed post conflict.

In Sierra Leone, however, even after the involvement of UN for over 4 years, the key issues triggering the civil war were not close to having been resolved. Sierra Leone being a hub of illegal diamond trade and smuggling in the world remained the poorest among the western African nations. Diamonds were in such abundance that one could just use a trowel to dig a foot deep and find one. With so much diamond, people rarely bothered about Gold, which could easily be panned from any of the streams. Natural resources of precious metals such as Titanium etc were abundant. However, it was diamond which was the key valuable object. The presence of diamonds attracted many armed groups to take over mining areas. As per one estimate, about 89% of diamonds were smuggled out with or without involvement of government officials. The powerful political and bureaucratic elite illegally traded another 10%, while only 1% of its actual worth trickled down to the public. The common man only ate broken rice with watery Kassawa once a day. Hunger and disease such as Lassa virus and Malaria was rampant. Anything that could move except a car and anything that could fly except a plane had been eaten during the war and afterwards. There were hardly any animals left even in the dense afforested areas. There were reports of cannibalism and magic rituals. Fathers would willingly trade their teenage daughters for food. Women would willingly become sex slaves for food. And this was being done under the watchful eyes of the rich elite as well as foreigners who were from NGOs and UN alike. Women were being bought and sold in cities and towns. Female genital mutilation was common and was even celebrated in various communities by throwing village parties. Tribal sentencing for committed crimes in ruthless manner was a common thing. And all this was happening after the war had ended. During the war, human debauchery had crossed all known limits of ruthlessness. While various rebel groups and sub groups took over village after village, strong young boys were taken as child soldiers and trained to be merciless. They were taught that respect is only gained through the barrel of the automatic weapon they carried. The left over children were lined up in the village center and had at least one of their limbs chopped off by a machete leaving them screaming and passing out in pain, only to wake up to live the rest of their lives with one of two arms or legs. Imagine a whole generation in a country left with one arm or leg! Women were raped and then savagely tortured with their bellies cut open and their unborn children ripped out of their wombs. These were the gruesome realities through which the people of Sierra Leone had survived.

Yet, while UN forces and NGOs created a semi peaceful status in the country, only such conditions persisted that maintained sufficient peace for making businesses for other powers shine. The root cause of the conflict i.e corruption leading to extreme poverty was  not being addressed in a methodical manner and in most cases was neglected totally. It was repeatedly reported in ops and intelligence reports by MILOBs that unless the key issues are resolved, peace will not be long lasting. Quite akin to Sudan where conflict restarted once the UN peacekeepers left. However, it was felt that the reports fell on deaf ears. But peace was important to the foreign stakeholders and had to prevail even though the root causes were not being addressed. After all, majority of diamond smuggled out of Sierra Leone through Lebanese businessmen ended up in Antwerp, Belgium for fine cutting after which they made their way to the British markets in London. The contract for mining titanium used for construction of Satellites and space vehicles was awarded by Sierra Leone government to a US company for merely US $5 (or $35) per year. Even the UN observers were not permitted to enter the area. The sign said, “Trespassers will be shot.” Under the umbrella of humanitarian support, natural resources were being plundered by powerful nations. The seas were being illegally harvested of seafood by ships from Northern Europe to China. Such was the epic proportions of plundering and looting under the nose of the UN. The Indian UN forces had been kicked out for smuggling diamonds which was carried by officers of the Indian UN forces and not through Indian companies unlike the powers of the evolved developed world. Similar situation persisted in Somalia in the 90s when US Military Engineers company was mining uranium and loading a ship per week to carry it away. In Congo and Central African Republic, Diamond and precious metals were being looted. The leadership of the UN mission across Africa clearly echoed the capitalist powers hithertofore, silently authorized for plundering the riches of Africa under a legal business framework while UN provided security. Sierra Leone was under the leadership of the British, Liberia under the US and Côte d’Ivoire under the French. The best Chocolate still comes from Côte d’Ivoire and delightfully savored in France. Where the Money flows, the story goes! Notwithstanding the capitalistic interests of greater powers, forces provided by developing and third world countries in the UN such as Pakistan continue to do their job in the finest manner and in most cases even above the mandate oblivious to the greater picture. Pakistani Military Engineers continue to rebuild roads and infrastructure often beyond the approved budgets on self generated funds. The units have rebuilt schools and other development projects without additional budgetary approvals. Pakistani military units as well as individuals even provide cooked food from their own rations to the local population. Officers often take personal responsibility of local village children for their educational expenditures including uniforms, books and food. Some of them even spend their evenings in teaching the children. All of this has been personally observed in Sierra Leone, Liberia, Sudan and Congo. By peacefully disarming and integrating over 10,000 Sierra Leonean rebels in to society as productive individuals, Pakistan set an example of true dedication to the cause of peace and social stability in the region. The love of Sierra Leonean people for Pakistani Forces was visible during the departure of Pakistani Forces. The roads for five miles leading up to the exit point were lined by men, women and children singing the Pakistani national anthem with tears rolling down their faces. This is a testament of Pakistan’s unparalleled support to post conflict African nations and those under turmoil.

Conflicts continue to grip numerous countries across the world from the Middle East to Asia. However, places like Kashmir and Myanmar continue to be completely ignored. Apparently, the signing pen only moves over the mandate when there is something to be gained by those holding it. When the business interests of the pen holders coincide with the hegemonic designs of the state committing atrocities, organizations responsible for Peace seldom come into play. And hence, the seeds for greater conflicts in future engulfing whole nations slowly germinate.

The pictures used in this article have been taken from Pakistan Army Spirit of Peace Report and some pictures are from author’s personal collection.