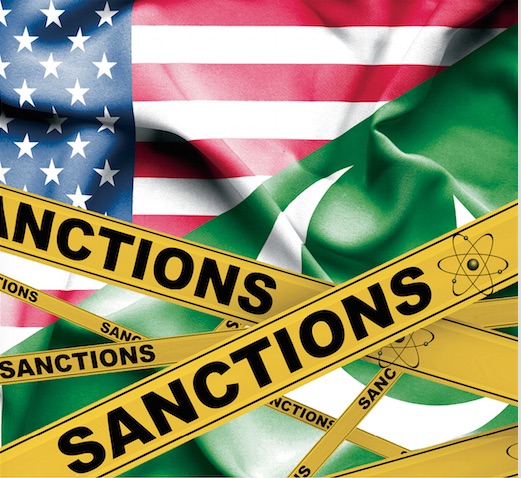 There is no consensus in sanctions literature in international relations scholarship on their ‘efficacy’ in either deterring or changing a state’s behavior or even whether multilateral sanctions, as tools of coercive diplomacy, are more effective than unilateral sanctions in achieving their desired objectives.

In the context of Pakistan, the U.S. non-proliferation policy portfolio reveals a mixed bag of aid and sanctions as resources used by the U.S. to constrain Pakistan’s nuclear activities. Each administration from Ford to Clinton, chose a particular action, for example, the promise of aid to Pakistan in lieu of assurances of non-possession and non-development of nuclear weapons or the threat of sanctions and aid cut-off to Pakistan in the absence of such assurances. However, each time the goalposts on U.S. tolerance for proliferation were moved to accommodate Pakistan for one foreign policy objective or the other, a cost was inherited.

From 1974 to 2001, the U.S economic and military assistance to Pakistan was linked to non-proliferation assurances from Pakistan and not only in periods of high U.S. credibility and high dependency on U.S. aid by Pakistan. The U.S. not only undermined its threat credibility, it consistently compromised on its non-proliferation norms under all five administrations from Ford to Clinton to achieve other foreign policy objectives. Thus, the cost for U.S. shifting its non-proliferation redlines –– lifting sanctions to enlist Pakistan’s support during the Cold War –– came in the shape of a nuclear Pakistan.

The literature on U.S. non-proliferation legislation confuses the rationale and objective of the Symington and Glenn amendments. Mitchell Reiss in his book Bridled Ambition (1995) clarifies that confusion as follows

Pakistan’s nuclear weapons program in 1977 was still in embryonic stages and there was no device ready for nuclear testing even though work on developing the test sites was underway at that time, as Feroz Khan details in his book Eating Grass (2012). The only other country that had a nuclear weapon and was in a position to conduct a nuclear explosion in 1977 was South Africa. As Or Rabinowitz details in her book Bargaining on Nuclear Tests (2014), by mid 1977, there were indications of nuclear-test site preparations by South Africa in the Kalahari Desert although Pretoria denied any intentions to test nuclear weapons. Therefore, it can be ascertained that Pakistan could not have been on the minds of the architects of the Glenn amendment when they specified aid cut off after a nuclear explosion.

An August 10, 1977 statement by a spokesman of Pakistan’s ministry of foreign affairs revealed details of a secret visit by Joseph Nye, deputy to the under-secretary for security, science and technology affairs on 29-31 July 1977 to discuss the contentious issue of plutonium reprocessing plant. According to the statement “Pakistan side reiterated the determination of the interim Government to implement the agreement with France and made it clear that Pakistan would not countenance delays of any kind in the execution of the various steps envisaged for going ahead with the project.” The purpose of Nye’s visit was not only to threaten the cutoff of economic assistance as per the Glenn amendment –– as documented by Dennis Kux in his book Disenchanted Allies, but also to persuade Gen. Zia to participate in Carter’s International Nuclear Fuel Cycle Evaluation (INFCEP) program. And it was through Pakistan’s participation in INFCE that the problems associated with U.S. non-proliferation legislations were to be relieved. The idea was to tell Zia that if he agreed, his deferral on receiving French technology transfers would be placed in a “global context as the Pakistani contribution to the INFCE.”

In his meeting on July 30, 1977 with Agha Shahi, interim foreign affairs adviser to Gen. Zia, Nye pointed out that “reprocessing may become obsolescent after INFCEP and that recycle is of questionable value even for the U.S. with a large number of reactors.” Shahi nevertheless replied by stating that the reprocessing issue for the interim military regime was “political dynamite” and the interim government had no choice. In reply to Nye’s question of what would the interim government prefer –– “two month de facto delay or foreclose various options for cooperation, including economic aid and perhaps military sales with the United States,” Shahi replied, “Zia knows he would be politically discredited if he touched this issue.”  Munir Ahmed Khan, Chairman PAEC also attended the meeting and when Nye inquired about the status of ‘transfer of technology from France,’ Munir Khan confirmed that “all important technology for the plant had been transferred by July 1974.”

Shahi was correct in his observations –– Zia was relentless on the issue of reprocessing. On the question of pressure from the United States on the reprocessing issue during a press conference on September 1, 1977, General Zia once again reaffirmed his commitment

“We stand in a much better position than we were on the fifth of July 1977. The reprocessing plant is no longer either a political or a national issue. The previous Government had initiated the deal, and I have said that I will abide by it. The leaders of the previous Opposition have all said, one by one, that they want it. And knowing what I do of France, I have no doubt that the French will stand by their commitment. They are honourable people.”

The reprocessing issue overshadowed Pak-U.S. diplomatic relations under Zia from mid-1977 onwards and resulted in brief U.S. development aid suspension for Pakistan in September 1977, which was resumed after a year. The French decision to cancel the reprocessing plant agreement with Pakistan was privately taken in 1977 and officially announced in 1978.

In their interview with Leonard Weiss, Douglas Frantz and Catherine Collins in their book The Nuclear Jihadist (2007) document Weiss’s meeting with Bertrand Goldschmidt, one of the directors of the French nuclear agency, in the spring of 1977 before the Glenn amendment became a law. Weiss had flown to Paris “to meet with senior officials to relay John Glenn’s opposition to the pending sale of the reprocessing plant to Pakistan.” According to the authors, “even before Weiss finished laying out Glenn’s concerns, Goldschmidt said the French had decided to stop the transaction.” But Goldschmidt also told Weiss that “unfortunately the French company involved in the deal had already sold Pakistan the blueprints for the plant.” Although one critical device known as ‘chopper’ used to ‘slice the highly radioactive spent fuel rods into pieces as a part of producing plutonium’ was still not provided to Pakistan by the French.

While this provided some relief to Weiss, it also made him think out of the box. According to Frantz and Collins, Weiss thought, “What if the reprocessing plant was not the true focus of the Pakistani nuclear plans? What if the plutonium route was a ruse? What if, while the United States spent precious diplomatic capital and intelligence resources trying to stop the French deal, Pakistan had another option for developing a weapon?” Weiss knew of Pakistan’s uranium enrichment program and thought perhaps, “enrichment was the real way the Pakistanis planned to produce fissile material.”

Weiss was right. General Zia did not cause a ruckus over the loss of French reprocessing deal not because he did not feel as strongly as Bhutto about reprocessing but because he was confident about achieving nuclear capability through an alternate route.

On his way home from visiting New Delhi in January 1978, Carter stopped in Paris to meet the French President Valery Giscard d’Estaing to discuss the Franco-Pakistan deal. Although it was privately confirmed that the French had taken the decision to cancel the deal, Giscard “agreed to make the decision official, but he insisted on waiting long enough to make it seem as if France was not submitting to American pressure. Six months later, the French Council on Nuclear Policy declared the contract with Pakistan null and void.”

The report safely estimated that “Pakistan could not develop a nuclear warhead suitable for delivery by a ballistic missile in less than five years from the date of a demonstration device.”

A month after the cancellation of the French reprocessing plant agreement, US Secretary of State Cyrus Vance approached Agha Shahi with an offer of resumption of the suspended development aid with a consideration for military sales. But Shahi was warned that if Pakistan developed an indigenous nuclear explosive capability or attempt to acquire reprocessing technology from any other country then the non-proliferation legislation (reference Glenn-Symington amendments) would automatically be triggered resulting in the suspension of U.S. military and economic assistance to Pakistan.

The Carter administration terminated all military and economic assistance to Pakistan invoking the Symington Amendment on 6 April 1979 after an intelligence report confirmed the construction of a uranium enrichment plant in Kahuta. Richard Burt reported in The New York Times on August 12, 1979 that the Carter administration in an all-out effort to stop Pakistan’s enrichment program had set up an interagency taskforce under the leadership of Gerard C. Smith who was the Ambassador at Large, U.S. special representative for non-proliferation matters. Though the taskforce remained inconclusive, it had prepared three options to slow Pakistan’s march towards the bomb: one, offer conventional arms to Pakistan to modernize its military (may be offer F-5 or F-16 advanced aircrafts) as an incentive to forego the nuclear option; two, use stringent economic sanctions to cripple Pakistan’s economy and; third, “use paramilitary forces to disable the Pakistani uranium enrichment facility” to retard Pakistan’s nuclear progress. Pakistan’s program continued despite Symington sanctions and the cancellation of other foreign supplies by Pakistan’s European partners.

The Soviet invasion of Afghanistan in December 1979 and the loss of listening posts in Iran elevated Pakistan’s geostrategic status, aligning it with the American strategic priorities in the region. The U.S. Congress waived aid conditions under the Symington amendment in 1980 and in 1981 approved a $3.2 billion multi-year aid package for military and economic aid to Pakistan in return for its assistance to train Afghan mujahedeen’s to fight the Soviets. Pakistan used its new geostrategic importance for the United States at the height of the Cold War to its advantage, limiting U.S. policy options towards restraining Pakistan’s nuclear developments.

Dr. Rabia Akhtar is Director of the Center for Security, Strategy and Policy Research, University of Lahore. This article is excerpted from her forthcoming book titled ‘The Blind Eye: US Non-proliferation Policy Towards Pakistan from Ford to Clinton’ (University of Lahore Press, 2018).