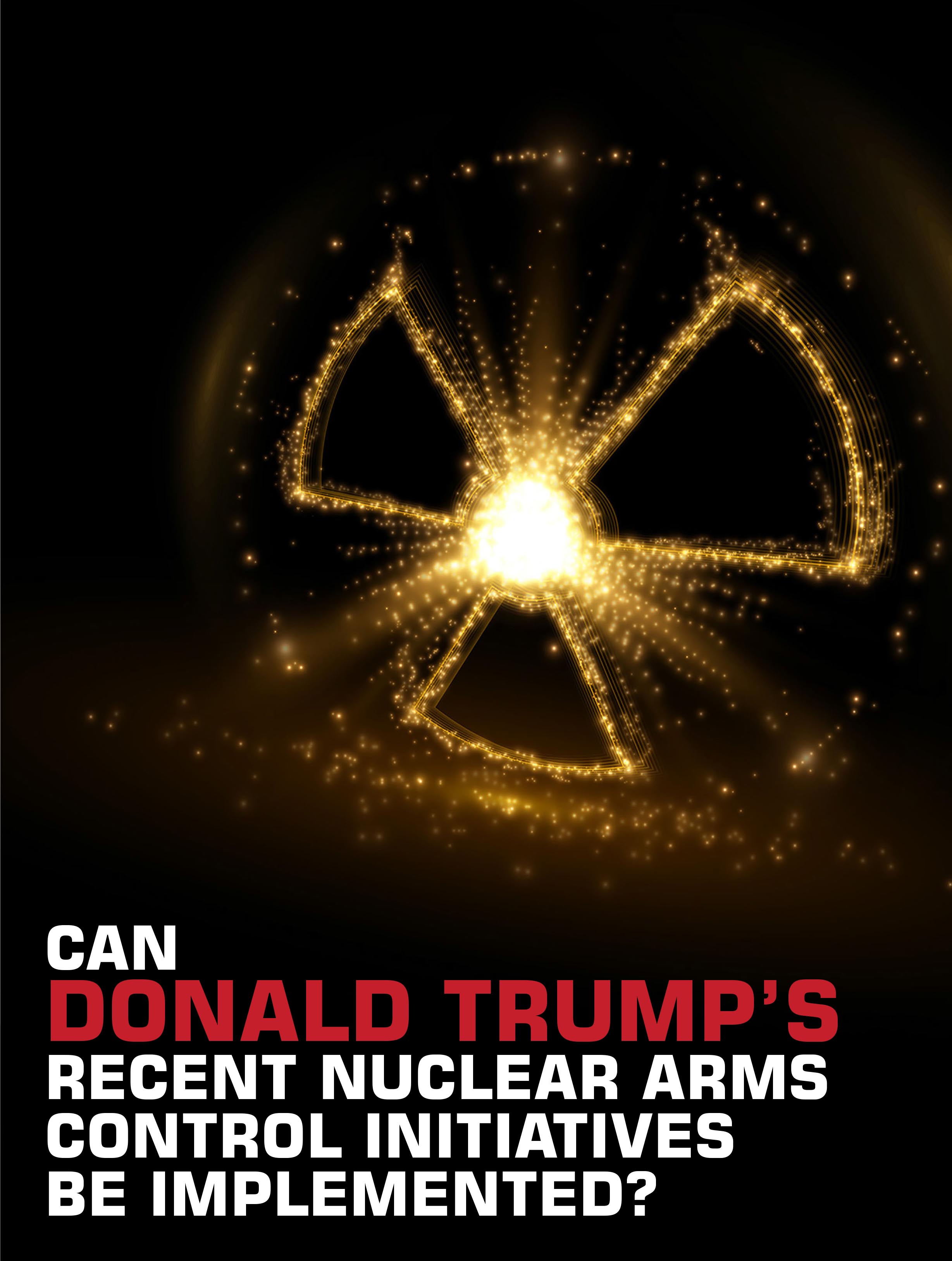 The U.S. President Donald Trump had a lengthy telecon with his Russian counterpart Vladimir Putin on May 3, 2019, about the possibility of a “new nuclear agreement.” The American Press Secretary Sarah Sanders had shared a possibility in a press conference, that it could either be a new U.S.-Russia-China multilateral nuclear accord, or the extension of current U.S.-Russia strategic nuclear arrangement – the New START.

However, both options have been regarded by many Russian and foreign experts as unworkable for two major reasons: first, nobody will sign a totally new multilateral nuclear accord limited to only three nuclear powers and neglecting the club of six more nuclear states; and second, the U.S. has not displayed any interest in extending the New START for the next five years after it expires in February 2021.

Russian officials and military experts have criticized President Trump’s idea made last April to elaborate a new accord on nuclear weapons and the delivery systems that would encompass all American, Russian and Chinese nuclear arms. His proposals on nuclear arms disarmament are “not serious,” as commented by Kremlin spokesman Dmitry Peskov on April 27, 2019.

Sergei Ryabkov, Russian Deputy Foreign Minister, noted last April that Moscow’s response to that offer would depend on the nature of any U.S. proposals. He underscored that further steps towards nuclear disarmament “… would require creating a number of prerequisites and taking into account many factors that have a direct impact on strategic stability,” including missile defense systems, cyber weapons, weapons development in space, and advanced conventional arms.

Nuclear arms expert Jon Wolfsthal, a Fellow with Harvard University and former Special Assistant to President Obama for Arms Control and Nonproliferation, has observed in the Defense One edition of May 2, 2019, that Trump’s idea to start talks on elaborating a new trilateral nuclear arms control treaty is likely a pipe dream or a “smoke screen” for scuttling yet another arms control agreement, and has the aim to kill the New START. In Wolfsthal’s words, the current U.S. President appears willing to undo anything achieved by his predecessor “as some kind of egodriven vendetta.”

Washington rejected Moscow’s proposal for a detailed consideration of specific measures aimed at strengthening strategic stability, mainly emphasizing the solution of only two issues of particular interest to it: the possibility of recreating nuclear weapons and their means of delivery by Iran, and the improvement of nuclear missile systems by North Korea.

The U.S. has been in the lengthy process to violate the New START as an important bilateral

Russian-American nuclear arms control treaty, which has an impact on global strategic stability. It will expire on February 5, 2021. High ranking U.S. officials have publicly admitted that the U.S. side will not be interested in extending its term for the next five years.

Over the past two years, in violation of the New START, the American Strategic Nuclear Forces have been re-equipping part of their strategic offensive nuclear arms, including four launchers at each of the existing 14 Ohio-class SSBNs and 41 B-52H heavy strategic bombers, unilaterally excluding them from the aggregate numbers specified by this Treaty. Such action gives the U.S side the opportunity to quickly increase the potential of their strategic offensive nuclear arms, increasing the number of strategic nuclear warheads by more than 1,200 units.

Besides that, in 2019, the current U.S. administration continued to destroy the system of international treaties in the field of arms control and at the same time made significant efforts to strengthen the national Armed Forces on a global scale in accordance with its key slogans “America first!” and “Peace through strength.” In December 2018, the 45th Republican President has ordered to hammer out a draft military budget for FY 2020 in the amount of US $ 750 billion that is $ 25 billion more than the expenditures allocated for the same purpose in the FY 2019. Washington continues to display a negative attitude to 12 more international treaties and agreements in the field of arms control. No other country in the world has ever broken off this alarming record. Some of these accords that the U.S. deliberately violated include the INF Treaty, the NPT, and the Open Skies Treaty.

A major U.S. violation in this domain was the revocation of the INF Treaty, that earlier was labelled by the high-ranking U.S. officials as a cornerstone of global stability. During the last twenty years this treaty has been violated 117 times by the U.S. side. Such violations have been recorded during testing of the American BMD system when its interceptors have been targeted at the INF test missiles involving six types of the shorter-range and medium-range ballistic and cruise test missiles prohibited by the INF accord. So, during such exercises Washington has violated Articles IV and VI of the Gorbachev-Reagan agreement signed more than 30 years ago.

This reliable information was borrowed from two major official sources. First, from the press-releases issued by the Pentagon’s Missile Defense Agency each time when it has conducted flight tests to prove the efficiency of global U.S. BMD “shield.” And, second, from specific reports prepared by the U.S. Congressional Research Service covering the records of these flight tests when the INF dummy missiles have been used as intercepted targets by the BMD system.

On the other hand, Russia has not violated the INF Treaty and is not going to be the initiator to torpedo it. During the last six years Washington has not tabled any clear evidence that Moscow has “violated” the treaty. The cruise missile designated as “9M729” does not fall into limitations of the Treaty, because it has maximum range of 480 kilometers. The U.S. has received detailed Russian explanations on this matter.

August 2019, because it has a two-fold task: to examine the viability of its own unlimited global BMD infrastructure, and to test the newly-developed INF missiles that would be deployed in Europe and in the Asia Pacific region.

A potential withdrawal of U.S. from the INF Treaty will:

1) undermine the global strategic equation, push all nuclear-weapon states into a deep-seated mistrust, destroy the NPT regime and prompt all 32 states capable to produce intermediate-range missiles without any limitations;

2) it will create a negative domino-style effect that will complicate nuclear arms control: in the military sphere it will block the potential resolution of the nuclear arms deal to be applied to the Korean Peninsula, may bring the U.S. nuclear weapons to Japan and the Republic of Korea; and in the political domain such step will undermine specific solutions at the upcoming 2020 NPT

Review Conference and erect unsurmountable obstacles for entry into force of the Treaty on Prohibition of Nuclear Weapons.

There are several goals that U.S. seeks by scrapping the INF Treaty: produce and deploy several new INF-type nuclear-tipped ballistic and cruise missiles in Europe and in Asia Pacific; repeat the situation emerged before the 1979 NATO “double track decision”; demand from Russia to unilaterally scrap its INF non-compliant ballistic and cruise missiles; engage China in the new nuclear dialogue and; demand from its NATO allies to increase the military expenditures initially specified at 2 percent level from the GDP to 4 percent.

While maintaining its tactical nuclear capabilities on the European continent, the U.S. continues to violate Article I of the NPT, which prohibits nuclear-weapon states from deploying nuclear weapons on the territory of non-nuclear-weapon states. The National Nuclear Safety Administration is asking for US $ 793 million in the 2020 FY budget to continue development and production of B-61-12 free-fall nuclear bomb with high accuracy.

The U.S. unilaterally withdrew from the ABM Treaty in 2002 and is not going to return to its obligations. The relevant consultations aimed at finding a compromise between Moscow and Washington on the BMD systems deployments that have lasted for 12 years has ended with no practical solutions. The U.S. does not want to resume such dialogue and set up maximum unsurmountable ceilings on BMD interceptors and their geographic deployment. It also refused to ratify some important agreements, such as the adopted Treaty on Conventional Armed Forces in Europe (CFE-1A) and the Comprehensive Test Ban Treaty. On the contrary, the current U.S. nuclear strategy described in 2018 NPR provides for the resumption of nuclear tests at the nuclear test site in Nevada. Recently, the U.S. Administration has decided to drop out of and not to ratify the International Arms Trade Treaty, the 2013 pact designed to regulate the international trade of conventional arms, including the sale of heavy weapons, and to reduce the illicit arms trade.

Washington has unreasonably imposed geographic constrains on the implementation of the Open Skies Treaty by banning overflights of Russian aircraft with relevant inspection teams over its upgraded missile defense centers emplaced in Alaska and Hawaii.

The current U.S. Administration has unilaterally withdrawn from the Vienna agreement on the Iranian nuclear program – the Joint Comprehensive Plan of Actions though it has been sanctioned by the UN Security Council. Washington is in no hurry to completely eliminate chemical weapons in accordance with the global Convention on its prohibition (CWC), although Russia has already done so.

The White House refused to discuss the draft of two international treaties: the Treaty on European security and the Treaty on the prevention of the placement of weapons in outer space.  The same attitude is demonstrated by the American side to Moscow’s proposal to extend the provisions of the Soviet-American Agreement on the prevention of incidents at the high seas of 1972 (INCSEA Agreement) to Russian and American submarines sailing in a submerged position, in order to prevent their underwater collisions though there have been already eleven cases involving them.

Moreover, the U.S. does not have any intention to debate a draft PAROS Treaty – an accord on preventing arms race in outer space tabled initially in 2008, and to take a commitment not to be the first to deploy space-based strike weapons.

Approved by the 45th U.S. President, the new ambitious nuclear strategy provides for lowering the threshold for the use of nuclear weapons by increasing the list of reasons for their use: it recorded 14 such cases against six, which were reflected in a similar strategy of his predecessor Barack Obama, and versus two clauses specified in the Russian nuclear posture. The current U.S. nuclear strategy provides for the possibility of using low-yield nuclear warheads of 5 kilotons and below, to be used for the “escalation of de-escalation” purposes.

Despite the objections by the U.S. Congress, President Trump retained the exclusive right to unilaterally use nuclear weapons under numerous pretexts, which has already caused concern inside two key parties of the country – not only the Democrats who are in opposition, but also the ruling Republican GOP.

A Congressional Budget Office (CBO) report released last February has estimated that the U.S. would spend US $ 494 billion on nuclear weapons from fiscal years 2019-28. That is an increase of US $ 94 billion, or 23 percent from the CBO’s previous 10-year estimate of US $ 400 billion, published in January 2017. The Trump’s administration’s budget proposals contain increases for several nuclear weapons systems.

All these factors create a new military reality, which Moscow has to take into account in its policy aimed at strengthening the country’s defense capability, the development of the Russian Armed

Forces, as well as in the conduct of pro-active foreign policy on the international arena in general.

The Russian Federation has created some completely new hypersonic systems to penetrate the U.S. BMD “shield” that the USA will not be able to match for several years.

In such dramatic circumstances there might emerge two additional global arms races – a missile defense arms race and a space-based arms race – that will complement the nuclear arms race that has never ceased since 1945. The sole responsibility for such unlucky scenario will be on the U.S., unless it contributes to the present nuclear world order the way it should be, with a focus on amicably resolving matters.

Professor Vladimir Kozin is Global Senior Fellow of NUST Institute of Policy Studies. He is member of the Russian Academies of Military Sciences and Natural Sciences.