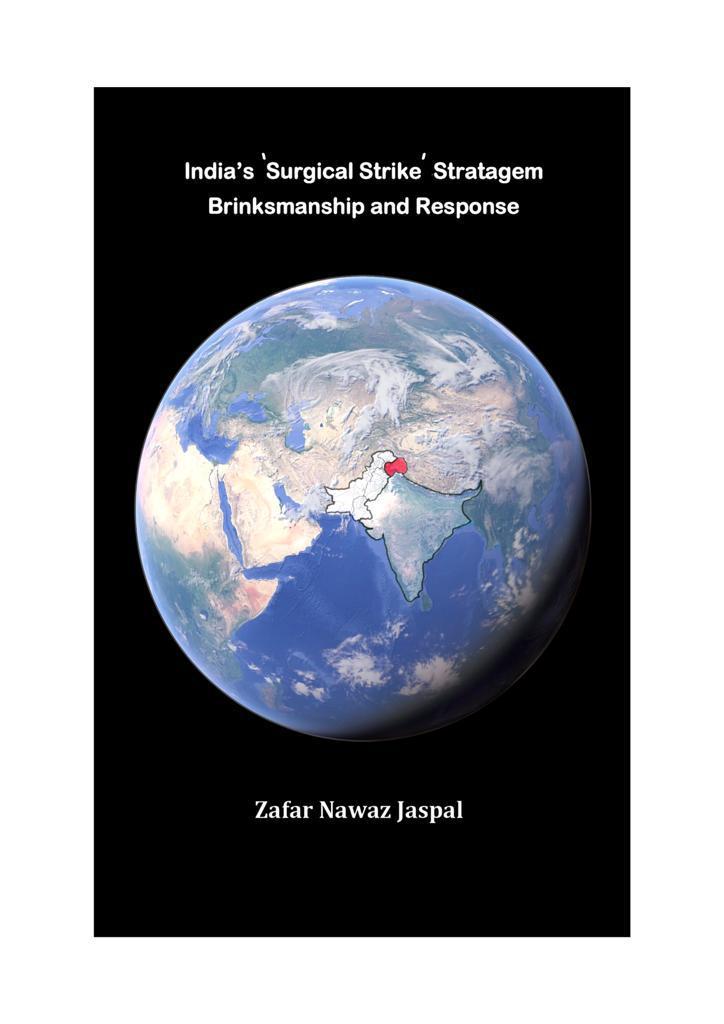 The book, ‘India’s Surgical Strike’s Stratagem: Brinkmanship and Response’ has been authored by one of Pakistan’s ace nuclear South Asia scholars, Zafar Nawaz Jaspal. The book assesses the strategic fallout of Indian military and political leadership’s approach of adopting much trumpeted surgical strike or in other words hot pursuit stratagems against Pakistani armed forces or the so called ‘Mujahedeen’s bases’ inside Pakistani territory. Jaspal has carried out an in-depth analysis of India’s military doctrine, its surgical strike gambit and its implications on strategic stability in South Asia.

In the introductory part of the book, Jaspal lucidly introduces the readers to the genesis of the surgical strike recourse which is now a part of the Indian conventional military toolkit. The Bhartia Janata Party (BJP), the current ruling party in India, is known for its nationalist, expansionist and extremist approaches. BJP in its manifesto promised its hardliner and right-wing supporters that Pakistan would be punished for its alleged involvement in terrorist incidents inside Indian territory. Since BJP cannot afford to meet its promise by fighting an all-out war against Pakistan, it sees  a respite in adopting an approach of launching surgical strikes or in other words hot-pursuit limited  conventional operations by its elite forces inside Pakistan’s territory. Jaspal, while highlighting the stratagem, also identifies India’s nefarious designs with the choice of  surgical strike strategy. He identifies that either it could be a preemptive approach or a preventive one. A preemptive approach is very much defensive in nature while preventive is offensive. Indian leadership opted to use or employ surgical strike as a preventive measure to meet the political ends largely to appease its domestic audience. Such an approach is repugnant to the UN Charter which refrains member countries from undertaking such actions.

After having stage set for subsequent five chapters of his book, Jaspal in  the first chapter titled, ‘India’s Military Doctrine: Philosophical Bedrock and Evolution’  reviews the Indian military doctrinal evolution which according to him has been influenced by the Indian leadership’s fixated aspiration of becoming a great power. Indian military doctrine has evolved from being strategic defensive to strategic offensive, in which Pakistan is seen as the main problem, as was initially identified by Nehru. Great power aspirations coupled with hyperrealists’ belief in political Hinduism has made the current Hindu nationalist government more inclined towards adopting offensive strategies. The Indian surgical strike stratagem is such an offensive strategy which is designed to checkmate Pakistan’s military morale in an attempt to subjugate it. Jaspal recalls the 1971 debacle that gave India the false confidence about its role as regional police. Given its assertive regional power projection, technologically advanced countries tapped into India’s arms market providing New Delhi with latest arms and transfer of technology (ToT). Indian military modernization was made possible through massive arms sales by top arms suppliers of the world which further shaped the Hindutva militarist ideology. This synergy manifested itself in the visible shift from a defensive military doctrine to an offensive doctrine of which Cold Start is just one prong.

In his second chapter, ‘Phantom Surgical Strike: Mystery Unfolded’, Jaspal narrates the saga of Indian surgical strikes across the LOC post-Uri attack. Jaspal calls them ‘phantom strikes’, an illusion created by the BJP government to placate the heightened public emotions seeking a military response against Pakistan post-Uri especially when Pakistan had denied any involvement. Jaspal calls the phantom surgical strikes, a blown-up spectacle staged by the Modi government in order to regain the lost political popularity, using military for domestic political gains, leaving it further embarrassed and demoralized.

In his third chapter, ‘A Sham Stratagem’, Jaspal details the account of domestic politics, discriminated diplomacy and military factors, which tempted India to opt for the destabilizing offensive stratagem of surgical strike. The Pakistan card was well played by Modi in order to secure his second tenure in office. In addition to that, other dividends like the Indo-U.S. military and export control relaxations allowing for Indian armed forces’ modernization in U.S. recognition of India as a major player in South Asia, are identified by Jaspal as some of the main factors that explain the shift to India’s offensive posture. It also initiated a debate in the Indian strategic community about abrogating its known and much trumpeted nuclear doctrine of No First Use (NFU). Pakistan, however, with its full spectrum deterrence capability signaled post-Uri that it will not be coerced into responding to the Indian phantom offense.

From Uri to Balakot, in the subsequent chapters, Jaspal discusses in detail the Pulwama attack and the resultant nuclear brinkmanship. Once again, close to general elections, Indian government used the ‘Pakistan card’ after Pulwama attack to garner votes from its Hindu majority vote bank by attacking Pakistan in Balakot. Pakistan responded in a befitting manner. Pakistan Air Force downed two Indian jets and bombed near Indian strategic targets across the LOC to signal Pakistan’s resolve and capability ensuring proportionality of response with no life loss. Pakistan’s conventional response not only took India by surprise but also surprised South Asia watchers outside the region. Pakistan’s restrained response ensured that an all-out war did not occur. Jaspal’s account of the Pulwama episode helps the readers understand how fragile the Indo-Pak relations truly are when a crisis ensues.

Jaspal concludes his book with an attempt to answer two basic questions: a) what are the risks associated with the Indian surgical strike strategy and b) what is the legal justification of such an offensive strategy through the prism of international law and customary international law. Jaspal argues that it is a risky strategy which could lead to escalation. The conventional offensive once launched between India and Pakistan has the potential to inadvertently spiral up the escalation ladder. Jaspal opines that surgical strikes, once conducted, leave very little time for politico-diplomatic machinery to intervene during a crisis. In his criticism of the legal justification for launching surgical strikes, Jaspal identifies two UN Charter Articles 2(4) and 51 that stand in contrast. Article 2(4) refrains UN members from use of or threat of use of force against other countries, while Article 51 justifies use of force in defense by one state against another. Jaspal writes that under no circumstances can India hide behind Article 51 since the actions of non-state actors cannot be attributed to sovereign states and used as a pretext to use force. Jaspal also highlights India’s state sponsored atrocities in the Indian Occupied Kashmir that aim to suppress the  indigenous freedom struggle by Kashmiri freedom fighters.

Jaspal has given an all-encompassing account of the evolving Indian offensive doctrine of surgical strikes inside Pakistan. He has detailed the Indian domestic political milieu that contributes towards the rapidly worsening bilateral relations between the two nuclear weapon states encouraged by the discriminatory attitude of the great powers vis-à-vis India and Pakistan. Although fear of escalation to an all-out war is keeping India and Pakistan cautious of how far they push each other’s red lines, a Pakistani response to any future Indian surgical strike inside Pakistan might not necessarily be de-escalatory. Jaspal ends on a wise note of caution and hope suggesting that restraint with responsibility and sustained strategic dialogue are the only options for both countries to settle their unresolved disputes including the Kashmir.

Dr. Ahmed Saeed Minhas is a strategic and security issues analyst who is associated with DHA Suffa University, Karachi.