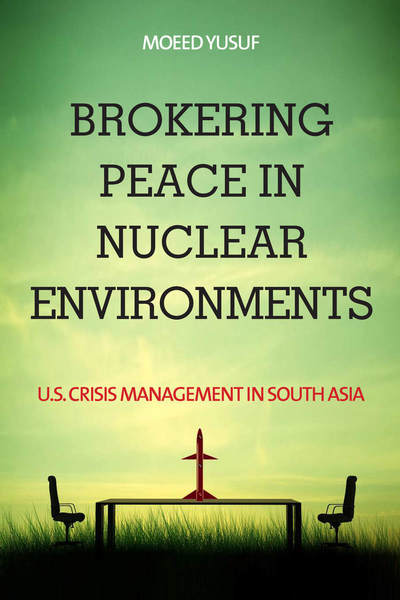 South Asia has been prone to crises ever since the inception of India and Pakistan. This volatile theatre has been vitiated as both countries have gone to war, embroiled in skirmishes and after the nuclearization, resorted to brinkmanship. By this virtue, crisis diplomacy by the conflicting and third parties has been practiced time and again. South Asian crises after the overt nuclearization of the region have merited a great deal of scholarship that has primarily focused on bilateral nuclear deterrence, nuclear signaling and how the international community worried about the prospects of a nuclear exchange.

However, there was a lot more to the post-1998 crises between India and Pakistan especially with regard to their management and termination. Moeed Yusuf’s new book entitled “Brokering Peace in Nuclear Environments: U.S. Crisis Management in South Asia” sees recent Indo-Pak crises not through classical bilateral deterrence but through brokered bargaining: a trilateral process where the conflicting parties(Delhi and Islamabad) and the unipole( Washington ) signal, exercise resolve and show prudence in order to influence each other and their crises behaviors.

While not denouncing nuclear deterrence, the three-cornered brokered bargaining model brings to the fore the trilateral engagement between Islamabad, Delhi and Washington and its effects on the outcome of crises. According to Yusuf, conflicting parties are beset with trade off vis-à-vis third parties. They have to show the resolve bilaterally and act prudently in order to eke out the support of the third party. The third party for its part has to navigate between its carrot and stick approach.

Yusuf looks at the three major crises after both countries went nuclear. The Kargil conflict of 1999; the Twin Peaks Crisis of 2001/02 and the Mumbai Crisis of 2008. Yusuf’s evidence-laden research on Kargil shows that the operation was primarily carried out to evoke third-party attention. Quite rightly, Yusuf asserts that the US played an important role in diffusing the crisis out of its fears of inadvertent escalation ; its signaling to Pakistan was direct and so were its threats and inducements. What underlies Yusuf’s analysis on Kargil is that the US played a robust and assiduous role in de-escalating and terminating the crisis. Also, both Delhi and Islamabad pandered to the preference of the unipole. However, it is perhaps also  important to enunciate that the dynamics on the battlefield in Kargil would have eventually outlawed more fighting and the laws of deterrence would have eventually stopped escalation. However, despite highlighting the deft American diplomacy, Yusuf’s analysis entails a great deal of cognizance about the fog of war. Third-party mediation could have indeed resulted in crisis instability due to mistrust and creeping misperception about Washington’s moves during the crisis could have been discomforting for both India and Pakistan.

The Twin Peaks Crisis of 2001/002 saw an intense trilateral interaction between Islamabad, Delhi and Washington as elaborately explained by the author. Crisis termination overrode US’ foreign policy goals in the region to include its war efforts in Afghanistan. While the US played down the middle, its role in fizzling out the crisis can hardly be understated. Indeed, while showing a great deal of resolve to ward-off Indian threats, Pakistan’s rapidity of clamping down on anti-India elements, showed the country’s prudence in heeding to US’ pressure. However, many can attribute it to India’s show of force and other kinetic means of compellence. Apart from vigorous crisis diplomacy, classical deterrence was being played out to good effect. General Kidwai’s interview during the first peak was an archetypical signal from Pakistan ostensibly aimed at only its eastern neighbor. Yusuf’s chapter on the Twin Peaks Crisis amplifies one thing: US’ diplomacy was instrumental in averting a war between the two arch rivals. That said, in spite of succumbing to US’ preferences, both India and Pakistan vociferously engaged in saber-rattling and nuclear-use signaling. Perhaps it would be prudent to argue that absent nuclear deterrents in South Asia, Operation Parakram would have been carried out , in spite of US’ crisis diplomacy . However, Yusuf has adroitly used evidence to establish the centrality of brokered bargaining in the termination of the 10-month long military standoff.

A mixture of brokered bargaining and an in-tact bilateral deterrence prevented an escalation of the Mumbai crisis in 2008. However, the crisis had escalatory potential, something that could have come to limelight had a conflicting party(Pakistan) perceived the US to be inclined toward India or if India would have been emboldened to act tough after receiving sympathies from the international community.

Yusuf goes further and analyzes brokered bargaining. While third-party intervention has helped manage crises in the past, it is potentially destabilizing in the future. As of today, the trust-deficit between Islamabad and Washington is increasing. Islamabad feels that Washington is courting Delhi at its expense. Washington has, in the New South Asia Policy and the National Security Strategy, not only dished out laudatory references to India but also called upon it to play a greater role in the region. This situation can adversely affect crisis stability in a future Indo-Pak crisis. The US will jump-in early on in the crisis. The interaction of India and US’ quest to compel Pakistan will be destabilizing to say the least. Pakistan, a country that is already paranoid with the Indo-US nexus will take serious exceptions to crisis diplomacy that is seen to be in favor of India. Delhi is more likely to borrow courage from the US and commit a reckless act or conversely, Pakistan can do so out of the sheer need for pre-emption.

Moeed Yusuf’s riveting insights on the subject could not have come at a better time for practitioners and scholars. It gives a much-needed glance into the US playbook and how it is likely to be used in future crises in the South Asian theater. It is a rich addition to scholarship because it analyzes South Asian crises beyond the deterrence framework and concludes that crises behavior will be influenced by many other factors than nuclear and conventional deterrence. Most importantly, the US’ clout and its interests will determine the outcomes of crises in South Asia. Yusuf’s model also applies to the impending nuclear rivalries in the Middle East and the simmering one in the Korean peninsula. However, in the case of DPRK, the US is a conflicting party instead of a third one as in the case of South Asia.

The book can be ordered from Allied Company; UAN: 111-630-630 Email: inquiry@alliedbook.com. For more information visit www.moeedyusuf.net

Syed Ali Zia Jaffery is a Research Associate at the Center for Security, Strategy and Policy Research at the University of Lahore.