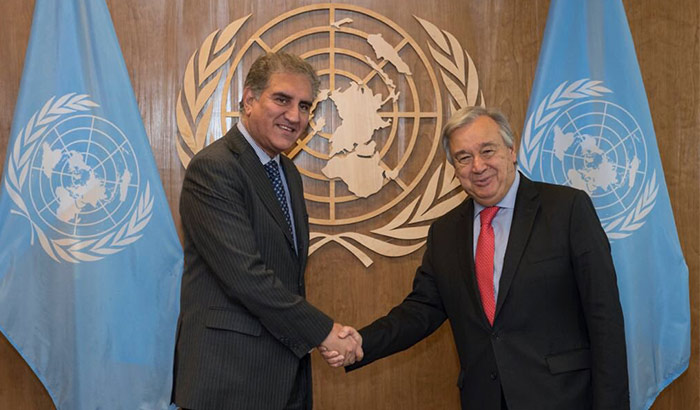 Every year, the United Nations General Assembly(UNGA) becomes a gala of international diplomacy in which all states vociferously tell allies, adversaries and the entire international community about their worldview, approaches to problems and vision for the future. Pakistan went into the 73rd session of the UNGA led by its new Foreign Minister, Shah Mehmood Qureshi. Islamabad’s top diplomat delved on all the glaring foreign-policy related issues faced by Pakistan. Understandably, rivalry with India and the simmering Kashmir conflict were at the heart of Qureshi’s address. However, both these challenges, amongst others, were seen through the lens of regional stability and the ability of world bodies to resolve conflicts. The tone and tenor of Pakistan’s statement accentuated the most conspicuous threats to peace in Pakistan and South Asia, signaling that meaningful efforts at the multilateral level are necessary to resolve issues.

At the outset, Qureshi outlined the guiding principles of the country’s foreign policy. Pakistan, he said, would engage with its neighborhood and the world based on equality and respect while remaining committed to safeguarding its sovereignty. Clearly, spelling out sovereignty, national interest and respect, means that these issues will be right up on the agenda of the new government. The issue of sovereignty was raked up once again when Qureshi discussed the role that India has played in sabotaging peace efforts. While lamenting India’s reticence to talk with Pakistan despite peace offers by the newly-elected Prime Minister, Imran Khan,  Qureshi warned India of reprisals if it entertained thoughts of a limited war. Given that third parties have time and again raised eyebrows about escalation dynamics in peace times, and intervened during crises, Pakistan’s warning was not just meant for Indian consumption but directed at influential third parties. Kashmir is often deemed as a nuclear flashpoint between the two countries. Pakistan used this to good effect. While highlighting the centrality of the Kashmir dispute in festering regional instability, Qureshi implored the UN to help bring an amicable end to the issue, which also happens to be on the agenda of the Security Council. After emphasizing as to why the non-resolution of the protracted conflict puts the region at great risk, Pakistan called upon the UN to institute a Commission of Inquiry and fix responsibility of gross human rights violations in Indian Occupied Kashmir that were brought to the fore by the UN High Commissioner for Human Rights.

Though nuclearization of the South Asian theatre has bolstered the bilateral deterrence equation between India and Pakistan, strategic stability is under constant threat. Qureshi pointed out that strategic stability is under pressure due to the induction of destabilizing weapons and the assimilation of incendiary doctrines. While the Cold Start Doctrine(CSD) is India’s own army-centric concept, the Ballistic Missile Defense(BMD) and the fast-evolving Indo-US defense ties mean that third parties impact strategic stability in peace times and crisis stability during crises. Thus, efforts  to redress instability are incomplete without the cooperation of third parties.

Qureshi did not directly address the history of Pak-US relations and how Islamabad has been left in a lurch. Instead, he weaved a link between stability in Afghanistan and Pakistan. Islamabad repeated its long-held view that the Afghan quagmire cannot be solved by military means, something that was but a signal to the most powerful third party – the US. This assertion becomes all the more real when one sees that Washington has been non-committal to talking with the Taliban. Pakistan tried to evoke third parties’ consideration by first shedding light on its successful counterterrorism endeavors over the past decade and a half and then identifying the role India has played in propping up violence inside Pakistan. The possible reason behind going the extra mile in ascribing terrorism to India could be to impress upon the international community that this may well become a major cause of crisis in the future.

Pakistan also tried to allay fears about China’s Belt and Road Initiative(BRI), of which it is an integral part by virtue of the China-Pakistan Economic Corridor(CPEC). Terming CPEC as an antidote to terrorism, Pakistan said that the project will benefit one and all. This was yet another signal to detractors not to see BRI as a threat but as an opportunity. One must be reminded that both India and the US have taken exceptions to the project.

Pakistan has invariably taken exceptions to attempts aimed at giving its arch-rival an edge in multinational groupings like the Nuclear Suppliers Group (NSG). The concern was addressed by Qureshi in his address wherein he called upon global powers to refrain from bending rules and adopt a rule-based approach.

Pakistan’s thrust at the UNGA was targeted at broaching with the international community the need for playing a greater role in regional peace. By assiduously portraying India’s recalcitrance to give peace a chance, Pakistan shifted the burden on India and other players. The drift of Pakistan’s enunciations in the UN was simple: global and regional players have vitiated the security profile of the region and hence the very players must help lower temperatures and put the region on the path of peace. In order to lend its diplomatic voice more strength, Pakistan has to follow up its robust campaign at the UNGA by striving to increase its clout in the region and beyond, ideally by mustering internal strength.