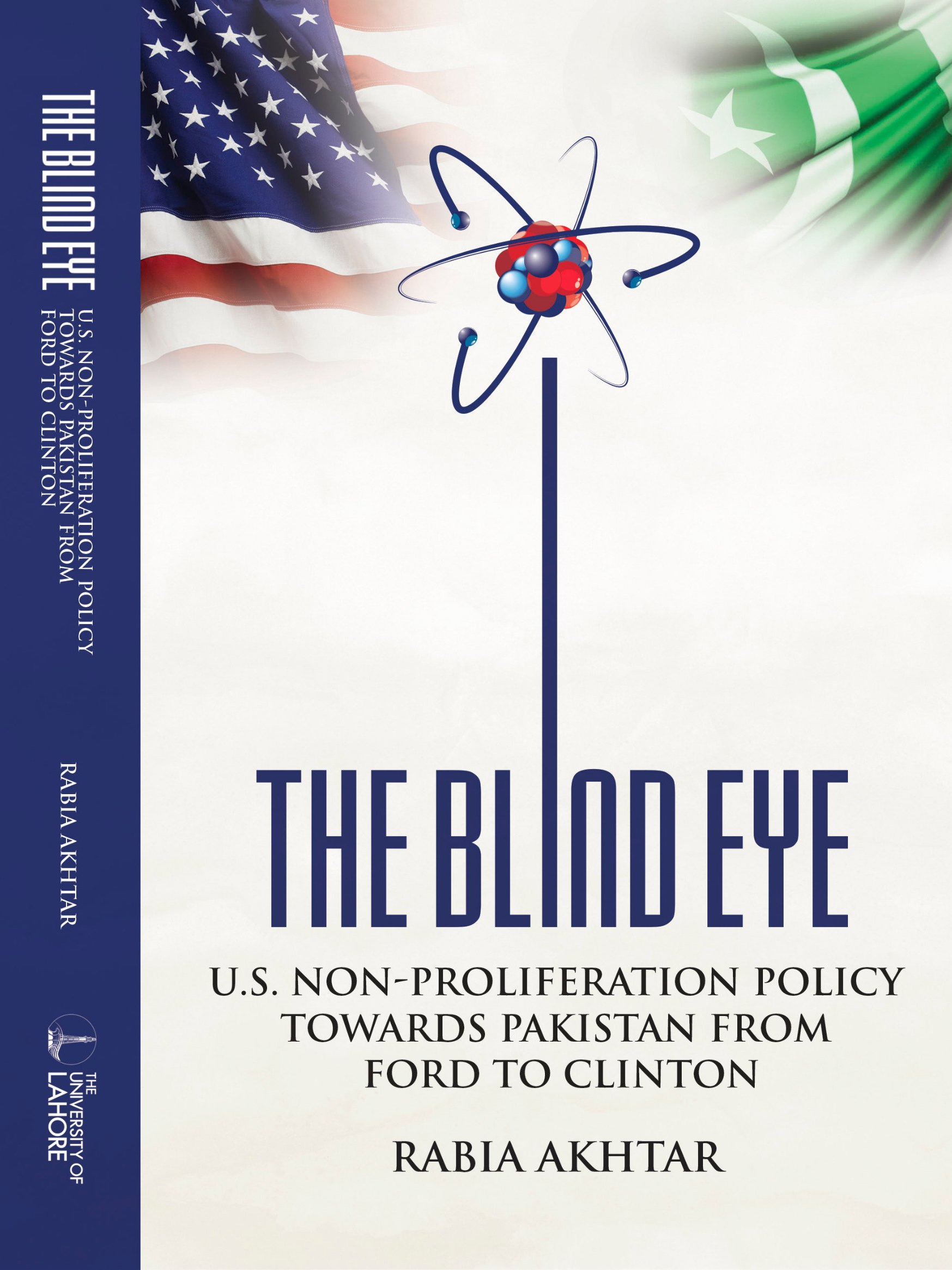 Both as a dominant global power and as a leader of the Western world, United States has been among the leading advocates of the policy of global nuclear non-proliferation. Washington has used war, threats of war, coercion, economic sanctions, regime changes, extended deterrence and multilateral statecraft as instruments to contain the threat of horizontal nuclear proliferation. As a result of this sustained U.S. led efforts only three states – India, Pakistan and Israel – remain outside the framework of the Nuclear Non-Proliferation Treaty (NPT) signed in 1968, while the rest of the world has collectively forsworn its right to own nuclear weapons by joining the NPT as non-nuclear weapon signatories. NPT grants the legal right to own nuclear weapons to only those states that acquired nuclear weapons before 1967 and these states happen to be veto-wielding five permanent members of the UN Security Council.

The book under review by Dr. Rabia Akhtar examines the conduct of U.S. Non-Proliferation Policy toward Pakistan under five successive U.S. administrations – Ford, Carter, Reagan, Clinton, Bush – and concludes that “U.S. failure to prevent Pakistan from achieving and testing its nuclear weapons capability was not a policy failure per se but an enforcement failure” where all five administrations “tried to establish an imperfect quid pro quo with Pakistan pushing the latter to choose between aid and the bomb.”  By shifting “non-proliferation goalposts and prioritizing foreign policy over non-proliferation policy,” Washington created dilemmas for itself that resulted in its ultimate failure to “influence proliferation behavior of a state [Pakistan] with determined nuclear ambitions.”

Rabia’s lucid account of the failure of the U.S. non-proliferation policy to rein in Pakistani nuclear ambitions is significant for several reasons. First, it relies heavily on primary sources including declassified documents from each of the presidential archives, and declassified governmental documents that have become available through the Digital National Security Archives and the National Security Archives based at the George Washington University, Washington DC to shed light on the reasons because of  which the US was unable to prevent Islamabad’s acquisition of nuclear weapons. Second, it is the first detailed account of the U.S. non-proliferation policy towards Pakistan over three decades covering policies of five administrations. Third, it looks at the Pakistan-U.S. alliance as a “two-way street”, as a “synergistic relationship, where both countries used the leverage they had towards each other to best serve their national interests.”  According to Rabia, in this process of bilateral bargaining, “both countries used each other to get what they wanted – Pakistan more adeptly than the United States.” She convincingly argues that “Pakistan achieved more than it had bargained for – it not only modernized its conventional military capability through U.S. military assistance but also developed a threshold nuclear weapons capability at the height of its engagement with the United States in the final decade of the Cold War. It was made possible due to minimal interference from the five administrations.”

This new information regarding U.S tolerant attitude towards Pakistani pursuit of nuclear weapons runs counter to Pakistani popular narrative, which characterizes Washington as an implacable foe of Islamabad’s quest for nuclear weapons.  Rabia uses this information to call for a “reset with respect to the objectives and successes of U.S non-proliferation policies” towards Pakistan. Fourth, Rabia’s superb account of flawed and failed U.S. practice of non-proliferation policies towards Pakistan, however, leads her to conclude that the prevalent narrative of  “betrayal has two sides to it” and if both Islamabad and Washington recognize this “bitter truth” then they can avoid a complete rupture of their ties.

Rabia points out three broad “inconsistencies” with respect to how Pakistan’s narrative has taken shape on U.S. non-proliferation policy. First, the narrative suggests that the U.S has repeatedly practiced double-standards on non-proliferation in South Asia by punishing Pakistan and India differently for the same offense.

Second, Pakistan has long believed that its efforts to acquire civilian nuclear technology to meet its legitimate energy needs have been “thwarted since the 1970s whereas India was rewarded for its proliferation behavior by several U.S. administrations.” Rabia cites Indo-U.S nuclear deal and U.S support for Indian membership in the NSG as prime examples of this obstructionist U.S stance towards Pakistan as viewed by Pakistani policymakers. She further notes that U.S. support for India is galling to Islamabad since “compared to Pakistan, India’s nuclear export control regime and the safety and security of its nuclear installations has poor record based on several reported cases of nuclear thefts and security breaches.”

Third, Washington forsook its alliance with Pakistan and sanctioned it after achieving  its major geopolitical goal of withdrawal of Soviet forces from Afghanistan.

Rabia’s riveting account of the U.S. non-proliferation policy towards Pakistan, reveals a “peculiar pattern” marked by a paradox, namely, “that although the non-proliferation policy by each administration was designed to create an imbalance in favor of Pakistan not going nuclear yet ended up with achieving just the opposite.” Rabia explains this paradoxical situation by pointing out to tensions between Congress and the Executive Branches of the U.S, government.  She writes: “Within each administration, the Congress exhibited its apprehension about Pakistan’s nuclear proliferation yet we see that it preferred giving aid to Pakistan with non-proliferation conditions attached. The Executive on the other hand, valued the security relationship with Pakistan and preferred giving aid with little to no non-proliferation conditions attached. The waivers cleverly enshrined in the U.S non-proliferation legislation enabled the Executive to turn a blind eye to Pakistan’s nuclear ambitions and development…Pakistan benefited from the disconnect that resulted from this fortuitous good cop, bad cop routine played by the Congress and the Executive.”  She notes, “the theft, the lies, the deception, the duplicity and manipulation that Pakistan is faulted for by the West –all of it- was Machiavellian, essentially needed to achieve its national security.”

Rabia has written a magnificent history of U.S non-proliferation efforts towards Pakistan that should be read by everybody interested in proliferation issues. This elegantly published book tells the remarkable story of Pakistan’s rise as a nuclear weapon state in the face of intense but varying degrees of American legislative opposition.