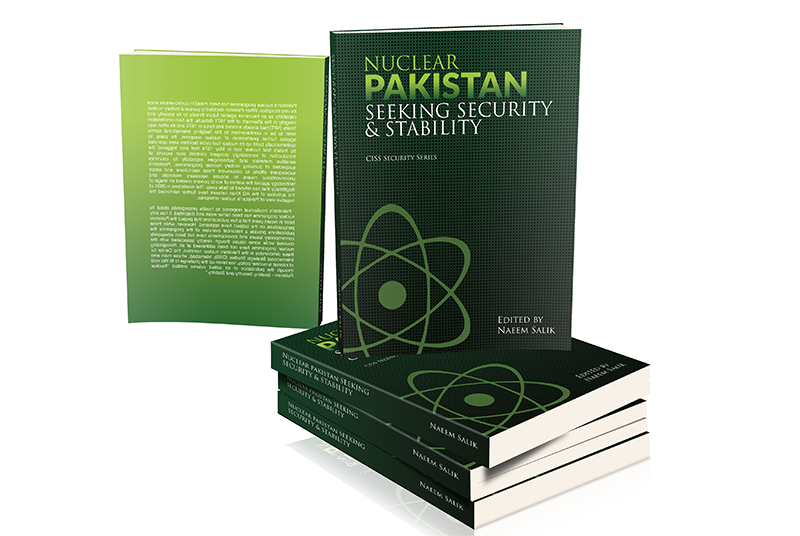 Published by: The University of Lahore Press

The nuclearization  of South Asia has merited a great deal of scholarship since the past two decades. Academic interests in this regard have shifted from analyzing horizontal proliferation to delving into vertical proliferation, induction of sophisticated delivery systems and assessing their impact on strategic stability. Professor Kenneth Waltz, a man renowned for being a proliferation optimist famously said: “If a country has nuclear weapons, it will not be attacked militarily in ways that threaten its manifestly vital interests. That is 100 percent true, without exception, over a period of more than fifty years.” Even a cursory glance at Pakistan’s nuclear journey tells that the spirit of this quote lies at the heart of “Nuclear Pakistan”.

Pakistan’s fast-paced production of nuclear warheads, its quest to attain Full Spectrum Deterrence and the safety and security of nuclear weapons, are the three elements of the Pakistani nuclear program that have attracted attention on part of scholars and also the international community, to include India and the US. While lamenting the dearth of literature bringing Pakistan’s perspective on these issues, Naeem Salik assiduously dealt with these delicate topics in separate chapters. His essays were part of a newlypublished edited book entitled “Nuclear Pakistan: Seeking Security and Stability”, of which he is the editor.

Drawing from his experience of working closely with and in the country’s nuclear establishment, Salik skillfully traced the evolution of Pakistan’s nuclear doctrine. While explaining the rationale for adopting Credible Minimum Deterrence(CMD) as the guiding principle of Pakistan’s nuclear strategy , Salik elucidated on why and how Pakistan’s doctrine has become dynamic and nuanced. By throwing light on India’s Cold Start Doctrine and the induction of the Ballistic Missile Defense (BMD) capabilities, Salik explained the reasons of Pakistan’s efforts to deter India against a full spectrum of threats. The evolving security environment in South Asia and the changing threat perception from India have compelled Pakistan to look for Full Spectrum Deterrence, something that will give Pakistan the elements of a war-fighting nuclear doctrine. Salik stressed that this shift from CMD to FSD will expand the size of the country’s nuclear arsenal and will add to the variety of delivery systems.

While spelling out the incentives for Pakistan to increase the size of its nuclear forces, Salik debunked the myth that Pakistan will be the third-largest nuclear
power in the world, by pointing out the anomalies in the available estimates of Pakistan’s fissile materials. Also, Salik enunciated that even calculated estimates by reputed publications are based on assumptions and are hence speculative at best.
The author assesses how Pakistan has taken measures to enhance nuclear security and safety. The evolution of the nuclear security regime, from an assortment of retired and serving officers to the establishment of a dedicated security division in the National Command Authority(NCA), is a testament of Pakistan’s commitment to ensuring nuclear safety and security. Salik also dabbles into the issue of the insiders’ threat as mentioned in recent scholarly articles on Pakistan’s nuclear weapons.

One of the most glaring references alluding to such threats was made in Christopher Clary and Ankit Panda’s paper on Pakistan’s sea-based weapons. Salik derides these assertions by penning down the range of measures put in place to vet employees working in strategic organizations. Watchers of South Asian security affairs show a great deal of consternation over how rungs of the escalation ladders can be crossed quickly; this makes discussion on nuclear management all the more important. Adil Sultan’s chapter on Pakistan’s command and control (C2) structure analyzes how the country’s nuclear management mechanism changed as the status of the program modified in-line with ever-changing security milieus. The author did not find substance in the fears expressed by scholars over Pakistan’s plans to pre-delegate launch authority to field commanders.

While iterating that Pakistan’s focus on assertive control is suitable given India’s posture, Dr. Sultan correctly states that the Never-Always equation may change if Delhi decides to review its No First-Use (NFU) policy, something that is even-otherwise not comforting. Dr. Sultan sheds light on the role of Strategic Force Commands under the aegis of the National Command Authority(NCA), laying to rest concerns about pre-delegating authority to battalion commanders deployed on the Line of Control, International Border and the Working Boundary.

The book also includes invaluable contributions from Dr. Zafar Nawaz Jaspal. While concluding his chapter on the current nuclear debates, Dr. Zafar says that the reliance of nuclear weapons’ states on nuclear weapons for their security is not likely to mitigate.Dr. Zafar pinpoints the discrepancies in the nonproliferation regime which according to him and many scholars, have only served the interests of the great powers. Citing the special Nuclear Suppliers’ Group(NSG) waiver to India in 2008 as an example, Dr. Zafar asserts that various non-proliferation arrangements are disrupted by shifts in strategic orientations of great powers.

More menacingly yet realistically, Dr. Zafar writes that rapid vertical proliferation in South Asia implies that any future conflict between arch-rivals, India and Pakistan will take place under the nuclear umbrella. The book takes a deep dive into various aspects of the 7th Nuclear Weapon State. To corroborate why Pakistan cannot be a reckless nuclear power, there is a need to fathom what the nuclear program means to Pakistan. Albeit focusing on the technical and scientific sides of Pakistan nuclear journey, Mansoor Ahmed’s riveting chapter on how Pakistan mastered the nuclear fuel cycle is instructive. It shows how the men that matter have remained committed and unfazed in ensuring the development, credibility and continuation of the nuclear program.

Ahmed unequivocally calls the mastery of the fuel cycle as the greatest feat in Pakistan’s nuclear excursion. The author says that Pakistan is still kept at bay when it comes to transferring sophisticated technology as evidenced by the politics surrounding the NSG membership, but this is matched by the country’s indomitable resolve to improve its strategic program and use nuclear power for peaceful purpose. Ahmed’s chapter is instructive, for it tells the world that the country will take all what it takes to embellish its nuclear program.

Ahmer Bilal Soofi’s chapter on Pakistan nuclear legislative regime is a fresh addition to a largely less-talked-about aspect in the discourse on Pakistan’s nuclear-related efforts. Soofi informs readers how Pakistan adapted to enactments and treaties. In a bid to assuage fears of the international community and recover from the fallout of the AQ Khan saga, the Parliament adopted the National Command Authority Act (NCA Act). A step in the right direction, the act establishes Pakistan’s legislative control over its nuclear program. While deterrence-enhancement measures are important to add credibility to Pakistan’s nuclear forces, legislative correctness acts as bulwark against the barrage of opprobrium; Soofi’s chapter has amplified this fact and also challenges the assertions that it was only after UNSC 1540 that Pakistan took nuclear legislation seriously.

Ali Sarwar Naqvi and Samia Sial’s chapter on Pakistan’s cooperative relation with the International Atomic Energy Agency(IAEA), will go a long way in dispelling the impression that Pakistan is not a normal nuclear state. The authors delve on the establishment of the agency, its functions and Pakistan’s multi-faceted cooperation with it. This detailed chapter apprises readers as to how transparent Pakistan has been with the agency, and in the process challenges those who questions its credentials as a responsible nuclear-weapon state state.

Sannia Abdullah’s chapter on Pakistan’s approach to non-proliferation across decades and security situations is lucidly articulated. It is also a testimony to the fact that, security, by virtue of being a vital interest, was preferred over nonproliferation. The thrust of Sannia’s work, if understood rightly, could be instructive for further non-proliferation efforts . Sannia succinctly looked at nuclear diplomacy conducted by Islamabad, which was primarily driven by security consideration and distrust of allies. Valuable lessons can be elicited from this chapter, especially in regard to trying to balance off the lofty goals of non-proliferation and hardcore security and survival.

In Sum, this compendium of scholarly chapters is an all-important addition to the ever-increasing literature on Nuclear Pakistan. While the book duly focuses on doctrinal aspects and those of C2, it delves into the often times ignored issues of nuclear diplomacy and lawmaking. It is a must-read for anyone who wants to understand what “Nuclear Pakistan” is , what drove its past and what will determine its future trajectory.